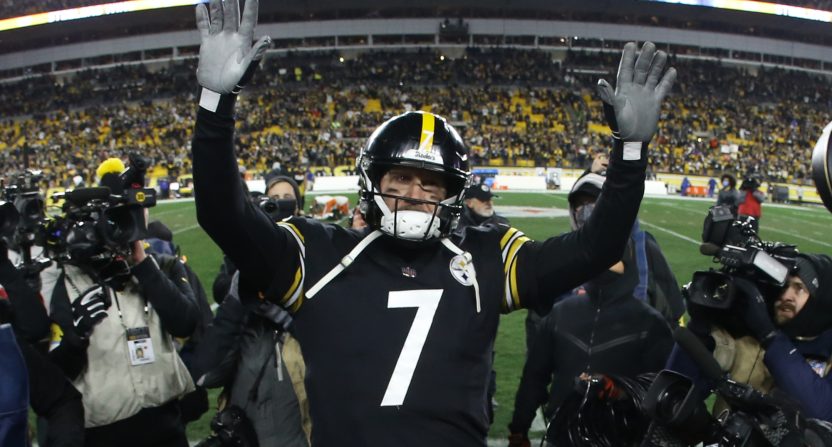 How are we supposed to talk about Ben Roethlisberger? Sure, we could focus on football. Plenty of people feel comfortable doing that. The ugly details are harder to discuss. We’ll get to those in a moment.

Roethlisberger took a victory lap around Heinz Field on Monday night after the Pittsburgh Steelers beat the Cleveland Browns 26-14. It was likely his final home game.

This Sunday could be the end of Roethlisberger’s career; the Steelers need a victory over the Baltimore Ravens and help to make the playoffs (there’s only a 9% chance they get in).

He’s a great player, a future Hall of Famer. Roethlisberger has given Pittsburgh fans plenty to cheer about for almost two decades: two Super Bowl victories, three Super Bowl appearances. He’s fifth in the NFL in career passing yards (63,844). He’s thrown for 500 yards in a game four times. No one else has done that.

At a quick glance, Big Ben is a success story for any small-college athlete with big dreams. These days he has the mobility of a skyscraper. But as an Ohio high schooler, he was once an all-state wide receiver who didn’t play quarterback until his senior year. That late development is the main reason why he wound up at Miami University in Ohio.

From humble beginnings, he made himself into a first-round pick. He was drafted 11th overall by the Steelers in 2004. When he was thrust into the starting job after Tommy Maddox was hurt there was doubt inside his own locker room. Offensive lineman Alan Faneca was blunt when asked about seeing the rookie play.

Faneca said, “No, it’s not exciting. Do you want to go work with some little young kid who’s just out of college?”

Completely understandable reaction for a veteran. However, it’s usually not something a player would tell the media on the record. As it turned out, Roethlisberger was good enough to go 13-0 as a starter and get the Steelers to the AFC Championship Game. The following season, he won Pittsburgh its first Super Bowl since the 1970s dynasty.

Roethlisberger was a caretaker in that offense. But soon he grew into becoming one of the league’s most dangerous passers. The football cliché of “extending the play” began with Roethlisberger. He used his legs to buy time in the pocket before firing downfield.

He was much more accomplished when he won his second Super Bowl, besting Kurt Warner and the Arizona Cardinals with one of the memorable plays of his career. An amazing touchdown catch from Santonio Holmes completed a comeback victory.

Two Super Bowl wins in his first four years. Amazing. But the Roethlisberger story has a dark side. And even years later we’re still grappling with how to address it properly and sensitively.

There have been multiple sexual assault allegations against Roethlisberger.

He was accused of raping a woman in a Lake Tahoe hotel room in 2008. The case was settled out of court in January 2012.

In 2010, a college student alleged that Roethlisberger raped her in a bathroom stall at a Georgia nightclub. The allegation was investigated. Charges were never filed.

During the news conference, the Baldwin County district attorney said, “Here the overall circumstances do not lead to a viable prosecution. If they did, I would be pursuing it vigorously. We do not prosecute morals. We prosecute crimes.”

While Roethlisberger wasn’t charged, the NFL suspended him for six games for violating the NFL’s Personal Conduct Policy. That suspension was later reduced to four games.

From that moment forward, Roethlisberger’s reputation was tarnished. Later that 2010 season, the Steelers reached the Super Bowl. Roethlisberger was gunning for his third Super Bowl trophy – a feat that would put him in an elite fraternity of Joe Montana (4), Terry Bradshaw (4), Tom Brady (then-3), and Troy Aikman (3).

Greg Bishop of The New York Times wrote that Roethlisberger “remained a polarizing, divisive figure. For all the stories written about his redemption, a cloud made such redemption difficult, if not impossible, to process.”

Over a decade later, that cloud remains.

The rise of the #MeToo movement has changed the way we talk about sexual assault. The media is doing more investigative journalism than ever before to shine a light on accusations and crimes. Powerful men have been held accountable; convicted, jailed, and forced to resign.

It’s significant to reiterate that we still don’t know all the details when it comes to Roethlisberger. But at the very least, those accusations should give us pause and make us think. We should have all cringed when the MNF crew referred to Roethlisberger’s sexual assault allegations as ‘immature’. That’s not acceptable.

When Roethlisberger circled the stadium on Monday night, the home crowd roared. They held up “Thank You Ben” signs. Human beings can compartmentalize and be myopic, especially sports fans. It’s not easy to think of the whole Roethlisberger story.

ESPN minimized parts of it. It’s important that we don’t do the same.