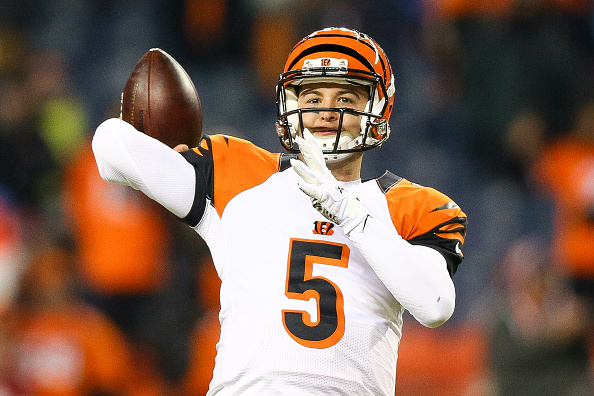 It has been the year of the backup quarterback in the NFL, with multiple playoff teams and hopefuls forced into playing their second-stringers thanks to injuries and other issues. One team in that position has been the Cincinnati Bengals, who lost their starter, Andy Dalton, to a fractured thumb a few weeks ago.

Replacing him was two-time BCS national championship winner AJ McCarron. However, McCarron went down with a sprained wrist in the Bengals’ 20-17 loss on Monday Night Football to the Denver Broncos.

However, Ian Rapoport of NFL.com is confirming reports that McCarron’s sprained wrist is fine and he will be a go for the season finale against the Baltimore Ravens on Sunday.

McCarron is good to go RT @JimOwczarski: McCarron will practice & says he won't be limited at all by his sprained left wrist. #Bengals

The news is good there because the Bengals will likely need McCarron in to the playoffs. According to an NFL.com report, Dalton’s thumb isn’t healing quickly and he is certainly out of action for the Wild Card round (if the Bengals can’t claim one of the AFC’s top two seeds) and could also miss the divisional round.

McCarron has filled in quite well for Dalton, completing 67.4 percent of his passes for 694 yards, four touchdowns, and two interceptions on the season. After throwing two interceptions in his first game during Week 14, McCarron has settled down and gone two games without a pick, passing for a touchdown in each of those games.

However, McCarron and the Bengals are just 1-2 in those three games and they’ve lost to the two winning teams they’ve played – the playoff-bound Broncos and playoff hopeful Steelers.

With the loss to Denver, Cincinnati will need the victory over Baltimore and a Denver loss to the San Diego Chargers to take the second seed and the much needed bye week. Not having Dalton and McCarron would certainly make a difficult task even more difficult.

It appears that the latter will be present and ready to go for the critical matchup with Baltimore, but will that be the difference maker for a team on a slide to the end of the season?