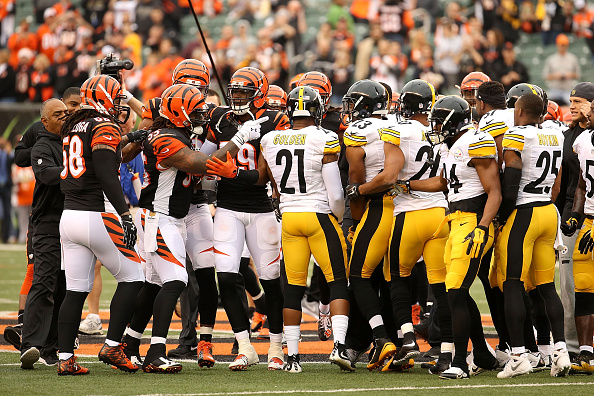 What exactly could Roger Goodell and the NFL have to do with a pregame fight between the Cincinnati Bengals and Pittsburgh Steelers? Apparently all of it, if you’re Bengals’ offensive tackle Andrew Whitworth.

The two teams scuffled a bit during stretching drills with linebackers Vontez Burfict and Vince Williams going facemask-to-facemask. How exactly is that the NFL’s fault?

Whitworth pointed to a series of tweets (yes, a Twitter war turned into a scuffle on the field) as the reason behind the hostilities.

CBSSports.com was able to grab the tweets in question, and one could see how Burfict would take exception to a death threat.

That’s exactly what Williams tweeted out on Nov. 1 after Burfict had a huge hit on Steelers running back Le’Veon Bell and celebrated while Bell was down injured after the play. It was a clean hit and Burfict couldn’t have known the severity of the injury at the time.

Still, Williams took exception to the hit and the celebration and made this threatening tweet (with the answer from Burfict):

@VinnyVidiVici98 why wait then u kno were I'm at pic.twitter.com/khEd43nBmf

Nothing happened to Williams after that tweeted direct threat, and Whitworth believes the NFL and Goodell’s lack of action caused the situation that occurred on Sunday afternoon, via ESPN.

“I’ll get in trouble for this, but this is the NFL’s fault,” Whitworth said. “The bottom line is, I love the Pittsburgh Steelers, I love Mike Tomlin, but they had a player that made a death threat to one of ours after the last game about spilling his blood in the streets, and everyone saw it, and the NFL did nothing about it.

Of all people to make cooler heads prevail during the scuffle, it was the dynamic duo of James Harrison and Adam Jones that finally broke it all up. Jones, who was out for this game, even stood at midfield with his walking boot on to avoid further issues after the initial confrontation.

Whitworth took particular exception to the fact that Goodell has talked a big game about character and representing the league in the right way, but did nothing to Williams after his tweet. His harshest words were directed at the league for that particular failure.

Sure, Burfict could’ve chosen not to react and start the scuffle on Sunday, but can you really blame a man after he receives a direct death threat from another man?

What the league could’ve done was very simple — suspend Williams for his actions and make sure it was served during this game. Or, alternatively, suspended him and provided security between the two teams during warm ups and pre-game activities.

It may have been seen as an extreme measure by some, but it would’ve prevented this situation from getting out of control. Imagine what would’ve happened had someone actually gotten hurt in this incident?

Goodell and the NFL would’ve had  a real big mess on their hands.

Point being, perhaps the league should take a stand against players handing out death threats to other players. Without it, the league has a stain on its already tarnished image, and one that was easily avoidable.