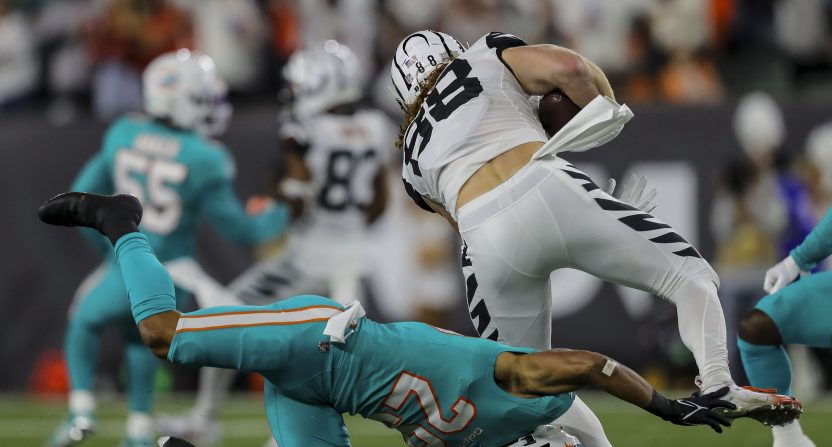 Thursday night’s game features the upstart Miami Dolphins taking on the reigning AFC Champion Cincinnati Bengals, who are looking to get back to .500 after a slow start. So, it’s a good matchup to get Week 4 of the NFL season going. It’s also good for another reason — the uniforms. The threads of both teams quickly drew rave reviews.

The Bengals announced in July that they’d have an alternate helmet, which would be white with black stripes. Early reviews on those were positive, as were the reactions when people saw Cincinnati’s team wearing them in practice. But the Bengals weren’t only wearing white helmets. They were wearing white jerseys and pants, too, sticking with the whiteout theme at Cincinnati’s Paycor Stadium. Miami, meanwhile, was wearing its all-aqua uniform to go along with the normal white helmet.

For the NFL world, the early returns on the alternate uniforms of both the Dolphins and Bengals were overwhelmingly positive.

This uniform matchup is 👌👌 pic.twitter.com/BhnF83z7PO

Got an all-time great uniform game on Thursday night 👍🏽

This uniform matchup is incredible. 🔥

The Bengals are going all white.

The Dolphins are going all aqua.

These are alternate uniforms for both the Bengals and Dolphins. But looking at the reaction of several football fans, both teams should consider breaking them out more.

The all-white look brought early luck to the Bengals, who scored a touchdown on the game’s opening possession on a five-yard touchdown run from Joe Mixon.