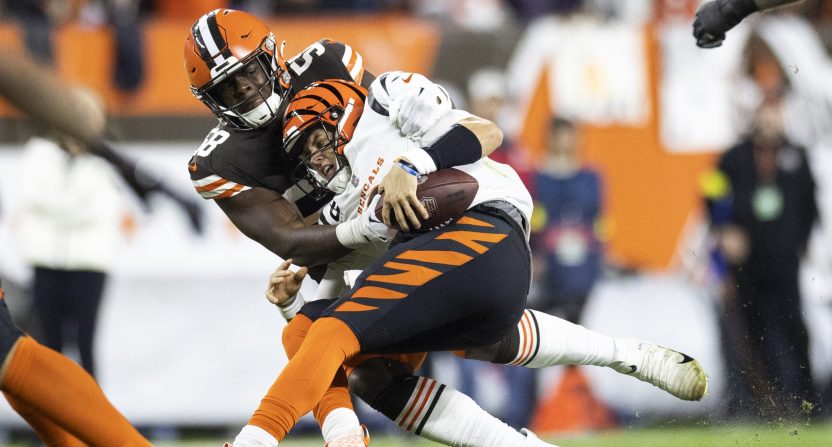 Many fantasy football matchups could be decided by Monday’s matchup between the Cincinnati Bengals and the Cleveland Browns, and it has not been pretty for Cincinnati’s offense thus far.

While the return didn't count, A.J. Green comes up with a huge pick to thwart a Bengals drive. pic.twitter.com/f1l6mwzsJA

Through one half of football, Burrow had 0.12 fantasy points in the game, and many important pass catchers for Cincinnati are not faring any better.

Star wide receiver Tee Higgins only had two catches on the game for eight yards, while his teammate Tyler Boyd is doing slightly better with two catches for 25 yards.

Many upset fantasy football owners took to social media to express their disappointment in the poor performances thus far.

CAN WE THROW THE BALL TO TEE HIGGINS

I need 3.9 points out of Tee Higgins. I am simply begging to get it over with in the first half so I can relax.

To be fair to Burrow and the skill players for Cincinnati, their offensive line has not helped them out whatsoever through the first-half, with Burrow being sacked three times thus far in the game.

This poor performance from the Cincinnati Bengals offense comes just one week after Burrow threw for  481 yards against the Atlanta Falcons.

It is certainly a huge falloff, but a huge part of these struggles could be do to the injury of star wide receiver Ja’Marr Chase, who is dealing with a significant hip injury.

He is not expected to be available for at least the next three games for Cincinnati, so they will certainly need to adjust on offense to come back in this game and compete for weeks to come.