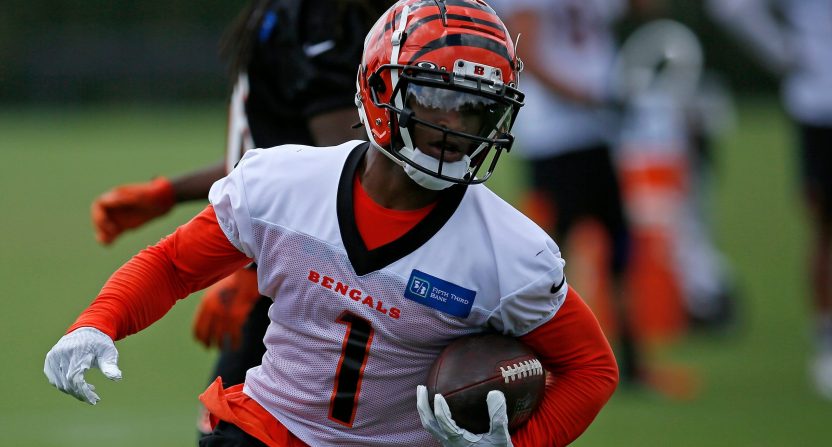 The Cincinnati Bengals selected LSU wide receiver Ja’Marr Chase with the fifth overall pick of the 2021 NFL Draft, in a decision that was heavily questioned, especially with Oregon offensive tackle Penei Sewell still on the board. Ultimately, the Bengals decided to take the former college teammate of Joe Burrow to give the quarterback an exciting weapon to throw to in the coming years (even though many evaluators thought Cincinnati should’ve gone with a blindside protector in Sewell).

Chase is a high-upside talent that was viewed as one of the best wide receiver prospects in years, but he also missed all of the 2020 football season due to opting out. And that’s after he played only two college football seasons.

So, Chase has understandably looked raw in his first NFL training camp, and things didn’t look any better for Chase in the Bengals’ preseason game against the Washington Football Team on Friday night.

Now, the first pass appeared to be a litle bit behind Chase, and the next two were closely defended. But these are still catches you expect an NFL wide receiver to make (alligator arms alert), and especially a receiver with Chase’s talent.

It’s way too early to draw conclusions on Chase, and again, it’s not surprising that a rookie who hasn’t played organized football in two years is having early struggles. And maybe he’ll get his game on track when he’s receiving passes from Burrow instead of Allen. After all, Chase had 84 receptions for 1,780 yards (21.2 AVG) and 20 touchdowns in 2019 with Burrow as the LSU quarterback.

So, we need to give it much more time, but this certainly isn’t a good start for Chase in the NFL, and it’s clear he has a long way to go to be the impact receiver the Bengals thought they were getting.

Related: Which NFL non-QB rookies are under the most pressure?