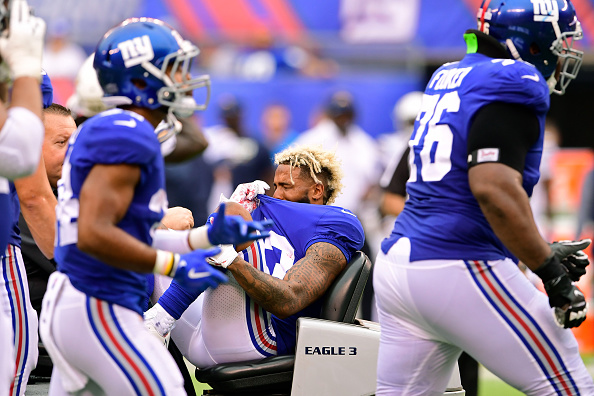 The fifth week of the 2017 NFL season was definitely a memorable one. However, most of these memories were created off the field rather than on it this week.

And as always, NFL fans and analysts were never shy to comment on Twitter about the day’s events. Whose tweets were among the best for this week’s group of games?

Having been in the league since 2004, Pittsburgh Steelers quarterback Ben Roethlisberger has had some pretty memorable moments throughout his NFL career. Sunday’s game against the Jacksonville Jaguars was certainly not one of them as the quarterback threw five interceptions, including two that were returned for touchdowns.

Ben Roethlisberger to the Jaguars:

How many interception did Roethlisberger throw? pic.twitter.com/PN2kk3K2CD

when ben roethlisberger wants you to have another interception pic.twitter.com/URj1NjED5i

Let’s take a look at the Roethlisberger interception counter pic.twitter.com/8P6WPku96S

Roethlisberger is German for Interception

After hauling in a touchdown pass to give the Philadelphia Eagles a 21-0 lead over the Arizona Cardinals in the first quarter on Sunday, Eagles receiver Torrey Smith and his teammates proceeded to perform a celebration that is what kids these days would call “knocking it out of the park.”

? RT @LONG_DRIVE: the best end zone celebration I have ever seen in my life. pic.twitter.com/znKyVl9ydO

As a Giants fan I inherently hate the Eagles, but gotta give props for this end zone celebration. pic.twitter.com/W2yqTolYzT

My guess. That Eagles celebration was Mickey Morandini hitting a home run at the old Vet. Dave Hollins on deck.

In what has already been a forgetful season for the New York Giants, their worst moment likely occurred during their game on Sunday versus the Los Angeles Chargers. During a play towards the end of the fourth quarter, Giants star receiver Odell Beckham Jr. suffered a fractured ankle after his leg got caught under a Chargers defender.

New York fans and Beckham’s fantasy owners acted as most would expect to the news of the receiver likely being out for the rest of the season.

In one of the weirder events from this past week in the NFL, a video leaked late Sunday night of Miami Dolphins offensive line coach Chris Foerster snorting a white, powdered substance (one which probably shares the name with a popular soft drink) off a table and professing his love for a certain woman. Since the video popped up online, Foerster has since resigned from his position with the Dolphins.

Note: if you’re in a public position, don’t rail lines and record it. #TakeAKnee pic.twitter.com/59KtpJZXw3

Dolphin’s coach Chris Foerster was caught on video tooting cocaine. My advice to the Dolphins is to sign Kaepernick as a way to deflect

The idea that Chris Foerster represents all white people is ridiculous. Most of us would never send video of our coke usage to a stripper

Adam Gase with unfortunate reference in explaining Chris Foerster. “He’s always been a guy who put his head down in work.” ?

Aaron Rodgers leads the Packers to yet another comeback win

Down by three with a minute and 13 seconds remaining in Sunday’s game against the Dallas Cowboys, Green Bay Packers quarterback Aaron Rodgers brought out his old bag of tricks. Rodgers led the Packers on a nine-play, 75-yard drive that resulted in him throwing the go-ahead touchdown pass to receiver Davante Adams with 11 seconds left on the clock.

Sometimes, it is really unfair how good Rodgers truly is when Green Bay needs him the most.

Aaron Rodgers’ game-winning TD against the Cowboys is so much better with Titanic music pic.twitter.com/0K2vVv5Vbw

Aaron Rodgers taking the kids to school for the second straight year. pic.twitter.com/y7YfYCGzA6

The Cowboys when Aaron Rodgers walks by them after the game. pic.twitter.com/jcv1408z9Z

Me: Who’s your daddy?

“I got a clutch comeback against the Cowboys down here”