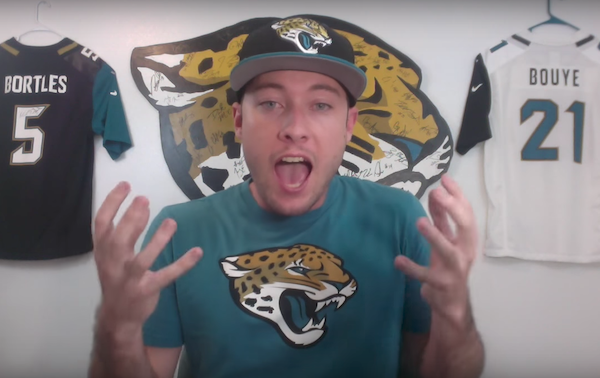 After spending last week watching NFL “fans” burn their team apparel in protest of players protesting during the national anthem, the normal reaction videos are back for Week 4.

A majority of them this week came from fans of teams who are off to some pretty awful starts to the season. But this actually makes it more entertaining to see them scream at their camera, so it’s a win-win for everyone.

So after the fourth week of the 2017 NFL season, whose reaction videos stood out from the rest?

After this guy watched his Carolina Panthers defeat the defending Super Bowl champion New England Patriots on Sunday, he made sure to let all the doubters out there know his team is for real this year. This is definitely not his first time in front of the camera either, as he has t-shirts made for his very own slogan.

My 12-year-old daughter can catch the football

Being a fan of the Cleveland Browns is quite possibly one of the hardest tasks someone can attempt during his or her lifetime. After his team was blown out by the Cincinnati Bengals on Sunday, this Browns fan is requesting three things from his team in order for him to renew his season tickets next year.

It has been an interesting season so far for the Jacksonville Jaguars in 2017, but their old habits crept back out during their loss to the New York Jets on Sunday. This Jaguars fan had a problem with one player in particular on their roster this week.

We just lost to the fancy pirates

Few saw the New York Giants beginning the 2017 season 0-4, but that is where they currently stand after falling to the Tampa Bay Buccaneers on Sunday. New Yorkers aren’t known for having much to say, so this Giants fan went pretty easy on his favorite team (or not).

All refs are swingers

This might be the most entertaining reaction video anyone will ever see. This Denver Broncos fan is really putting the blood, sweat, and tears into his work and it shows. Props on the “ThatsBadRaiders” montage, it resulted in quite a few chuckles.