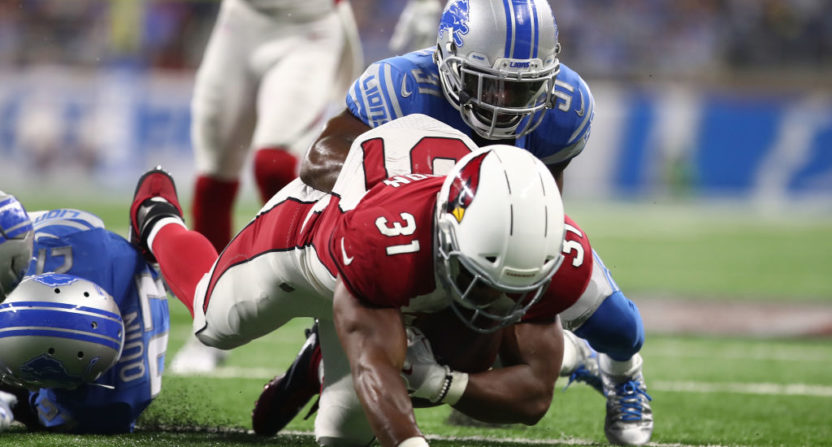 One of the best (and worst) parts of living in 2017 is the ability to see a reaction from millions of people at the same time, thanks to social media. The NFL is no stranger to its fans reacting online and it was no different during the first week of the 2017 regular season.

So whose NFL-related chirping made the cut for the best of Week 1?

During his game against the Odell Beckham-less New York Giants on Sunday night, Dallas Cowboys wide receiver Cole Beasley provided viewers with a crazy behind-the-back catch that some say even rivaled Beckham’s epic reception from 2015.

OBJ: “I have the best catch ever on #SNF“

Dak Prescott asked after the game if he saw that Cole Beasley highlight catch?

That was Cole Beasley’s greatest achievement since he played that guy that thought he was a pirate in the movie Dodgeball.

Rookies can catch too, Mr. Beasley

Before jaws were dropped by the Cowboys receiver on Sunday night, Detroit Lions rookie pass catcher Kenny Golladay introduced himself to NFL fans with his own amazing catch against the Arizona Cardinals earlier in the day.

WR Kenny Golladay was the first #Lions rookie to catch 2 TDs in an opener since Charles Rogers did it in 2003–also against AZ. #OnePride pic.twitter.com/77eFi9k9bG

GOLLADAY IS THE NEXT CALVIN JOHNSON DONT @ ME

During a game against the Lions in which he was already having an unimpressive performance, Johnson’s day got worse when he left the matchup with a wrist injury. The running back is expected to miss a good amount of time this season and a majority of his fantasy owners have already gone into hiding.

David Johnson is down on the field, please pray for 14 of my 19 fantasy teams at this time

The one year I get first pick and have David Johnson in every league, he gets hurt Week 1… pic.twitter.com/bvlcgZFBNz

Jeremy Lane gets ejected for a punch no one saw

Early in the matchup between Seattle and Green Bay, Seahawks corner Jeremy Lane and Packers receiver Davante Adams got into a bit of tussle. It resulted in Lane being ejected from the game for allegedly throwing a punch. However, no one has seemed to find any video of this supposed punch.

Jeremy Lane gets pulled down by the facemask and is ejected for “throwing a punch” that didn’t happen. Damn Replacement refs #SEAvsGB pic.twitter.com/rtiwwo3EXH

Another look at what Jeremy Lane was ejected for… pic.twitter.com/yG3qRwHR88

As a 300-pound defensive lineman, it takes a lot to get Jurrell Casey of the Tennessee Titans off of his feet. Well, that was until he was introduced to the second coming of Oakland Raiders running back Marshawn Lynch.

Jurrell Casey is one of the best DL in the NFL and Marshawn Lynch ran over him like a cornerback. Jeeze.

Rookie running back Tarik Cohen will likely be one of the few bright spots for the Chicago Bears in 2017. And if he can continue to perform like he did on Sunday against the Atlanta Falcons, Cohen could quickly become a fan favorite in Chicago this year.

Not liking this Tarik Cohen kid, no sir

TARIK COHEN YOU ARE RIDICULOUS

A team finishing their game with double-digit sacks is not a commodity in the NFL. So when the Jacksonville Jaguars continuously pounded the Houston Texans’ quarterbacks into the ground on Sunday, there were obvious jokes to be made.

#Jaguars defense had how many sacks? pic.twitter.com/CFrInOmLPc

In his debut as an ESPN sideline reporter for their Monday night game between the Los Angeles Chargers and the Denver Broncos, Sergio Dipp did not exactly break a leg with his introduction to the NFL world.

Sergio Dipp will be banging Rex Ryan’s wife by the end of the night. This kid is going to be a superstar.