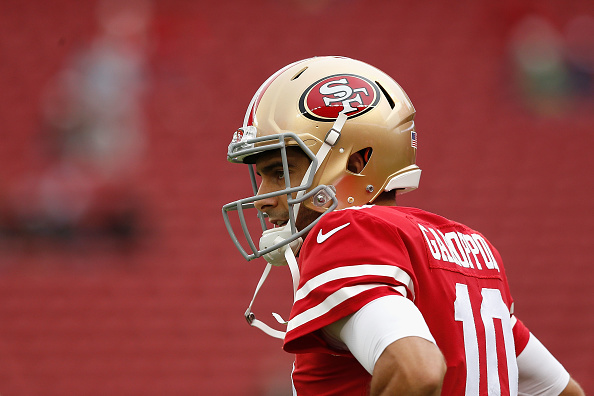 Amusing is one word that would accurately describe what went down during Week 12 of the 2017 NFL season. Everything from Michael Crabtree getting his chain ripped off again, to Mohamed Sanu having a better arm than any current Cleveland Browns quarterback, to Jimmy Garoppolo finally making his debut with the San Francisco 49ers.

So how exactly did the football fans on Twitter react to the league’s best moments this week?

This season, the Minnesota Vikings have been one of the most creative teams in the NFL when it comes to touchdown celebrations. Their bar was set even higher after Vikings quarterback Case Keenum ran in for a score against the Detroit Lions last Thursday and the Minnesota offense proceeded to sit in a dinner-style circle in the middle of the end zone.

The Vikings with the greatest Thanksgiving TD celebration of all-time

Fox gave the Vikings a turkey for their dinner celebration pic.twitter.com/PM9vsiPOLQ

It is hard to forget about the scene from 2016 when Denver Broncos corner Aqib Talib ripped the gold chain right off the neck of Oakland Raiders receiver Michael Crabtree. Well, the two got into it again on Sunday and guess what happened — again?

Crabtree and Talib fight of the year pic.twitter.com/I7JpZP1HDA

My Breakdown of the Raiders and Broncos fight :

– Aqib Talib is bout that Life
– Michael Crabtree stop wearing that chain
– And everybody is Marshawn Lynch Cousin pic.twitter.com/pLHHekl4M8

Has anyone started a GoFundMe for Michael Crabtree’ chain already? those gold chains are expensive and he already lost two of them to Aqib Talib. Help the man out.

Raiders’ WR Michael Crabtree taped his chain to himself before Sunday’s game, knowing he was facing the chain-snatching Broncos CB Aqib Talib. And Talib still got it.

49ers are finally forced to play their savior, Jimmy Garoppolo

Towards the end of their game with Seattle Seahawks, the San Francisco 49ers lost rookie quarterback C.J. Beathard to a knee injury. The 49ers had no other choice but to put in the player they sent a second-round pick to the New England Patriots for back in October. All Jimmy Garoppolo proceeded to do was complete every pass he attempted, including one for a touchdown.

When your grand children ask how the Jimmy Garoppolo era began… #49ers pic.twitter.com/yHvqPUMgmT

In 1:07 minutes of game time with Jimmy Garoppolo at QB, the 49ers scored 7 points

If someone were to bet on which Atlanta Falcons player would throw the team’s first touchdown on Sunday against the Tampa Bay Buccaneers, chances are most would put their money on Falcons quarterback Matt Ryan. Well, everyone would have lost their cash as Atlanta receiver (yes, receiver) Mohamed Sanu chucked a 51-yard bomb to fellow receiver Julio Jones for a touchdown in the game’s second quarter.

Greatest QB of all time? Mohamed Sanu has a perfect 158.3 passer rating in his NFL career with touchdown passes to AJ Green, Andy Dalton, and Julio Jones.

3rd career TD pass for Sanu…. That’s more than any Browns QB since football was invented