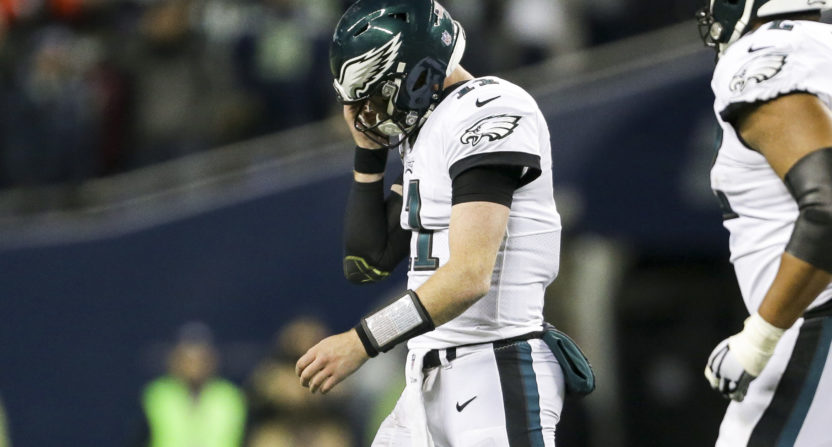 In terms of memorable moments from the NFL this season, a good chunk of them have come from incidents and events that have taken place off the field. However, this was not the case in Week 13 as most of the action happened in the actual gameplay from around the league.

So how did NFL fans from Twitter react to a few of the most notable moments from what went down in Week 13?

As the game between the New England Patriots and Buffalo Bills was winding down on Sunday, Patriots quarterback Tom Brady threw a pass that was intended for tight end Rob Gronkowski but then actually ended up getting intercepted by Bills rookie corner Tre’Davious White. Apparently upset about not getting a flat thrown for defensive pass interference or holding on the play, Gronkowski let his anger out by delivering a disgustingly, unnecessary hit to the back of White’s head after the whistle had already blown to end the play.

Rob gronkowski looking like Jimmy fly snuka with the late hit against the bills pic.twitter.com/0H4Pc691ZP

That was a straight up dirty hit by #Patriots Gronkowski. Regardless of frustration over interference, he can’t be allowed to get away with that. Terrible.

If Rob Gronkowski isn’t suspended at least 2 games for as dirty a hit as you’ll ever see __a running, diving forearm shiver to the back of the head while slamming his body on a man 50 pounds smaller who’s lying defenseless, face down__ then the NFL will let a star do ANYTHING.

I like how Gronkowski’s suspension is being handed out for what is called a “late hit.” That was not a late hit. That was a blindsided attack on a man on the ground.

yes, I do think that Gronkowski should be suspended for the rest of the NFL season, playoffs included. That hit was despicable.

Rob Gronkowski apologizes for his late hit on @TreWhite16.

Eagles lose for the first time since Week 2

With just one loss in their first 11 games of the 2017 season, the Philadelphia Eagles falling 24-10 to the Seattle Seahawks on Sunday came as a shock to some. Especially for some of the Eagles’ fans, who proceeded to act like the sky was falling after their team lost for only the second time all year.

*Eagles lose for the first time since September*

With their loss to the Seahawks yesterday, the Eagles are now the first team to ever lose a football game in NFL history.

Rough last 12 hours for the Eagles.

Worst part of the Eagles loss tonight?? Having to listen to Cris Collinsworth for nearly 4 hours

Marcus Peters does his best impression of a referee

While his team was attempting to avoid their sixth loss in the past seven games on Sunday against the New York Jets, Kansas City Chiefs corner Marcus Peters was not happy with a penalty called during the Jets’ attempted two-point conversion in the fourth quarter. In response to his team getting a flag thrown on them during the play, Peters reacted by taking the flag and throwing it into the stands at New York’s MetLife Stadium.

We are all Marcus Peters right now. I’ve thrown everything in my vicinity.

Marcus Peters threw that flag dead into the stands. He got a better arm than Alex Smith pic.twitter.com/43T64KJb0Y

The Jets fan catching the penalty flag Marcus Peters threw is the happiest I’ve ever seen a Jets fan pic.twitter.com/L93ueBrbwG

Marcus Peters walked off the field and he wasnt even ejected. Sources say the anger has been building for years from playing with Alex Smith

So Marcus Peters wasn’t ejected after flinging flag into stands, just left on his own into locker room. Was gone for a few minutes. He just came back out without his helmet. No socks, either.

Marcus Peters is back and ain’t wearing socks. SWAG on 100 thousand. pic.twitter.com/74NEGj8QhR

Joe Flacco can actually be funny?

Everyone remembers the awkward pre-game speech from Tampa Bay Buccaneers quarterback Jameis Winston from a few weeks ago in which he sucked on his fingers to apparently portray himself eating a “W” (also known as a win). Well, following his team’s 44-20 win over the Detroit Lions on Sunday, Baltimore Ravens quarterback Joe Flacco stepped up to the podium for his postgame presser and proceed to do his own version of “eating a W.”

Flacco was eatin the W pic.twitter.com/0cn0twFOPM

Joe Flacco started off his post-game presser imitating Jameis Winston’s “eating a W” gesture. Said he was dared to do it. Can’t say I anticipated seeing that. #Ravens

Another phallic-like object gets thrown on the field in Buffalo

Steelers continue to bodyslam their celebration competition this season

During a game that was marred by some pretty brutal hits, the Pittsburgh Steelers still found a way to have some fun during their 23-20 win over the Cincinnati Bengals on Monday. After a touchdown from Steelers running back Le’Veon Bell in the third quarter, Pittsburgh revealed their latest end zone celebration of 2017.

The @steelers going even deeper into their Celebration Playbook ? #NFLCelebrations (cc: @WWE) pic.twitter.com/yNFGZ55p9I

Steelers back at it again with the @WWE TD celebration #Steelers. pic.twitter.com/c1kUHtMOBd

AB with a weak 3 count on that celebration. #Steelers