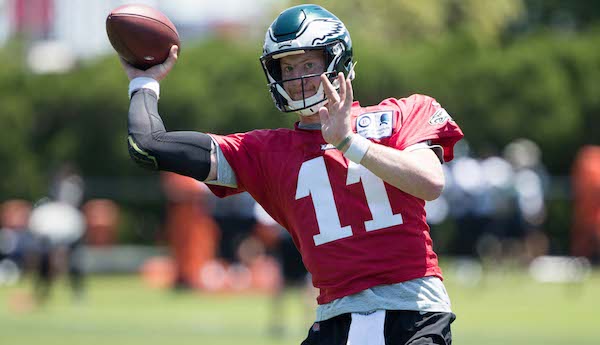 For the past decade, the NFC East has been one of the hardest divisions to predict. There is really no rhyme or reason to who ends up atop the division at the end of each season.

In the last 10 years, each team from the NFC East has finished first in the division at least twice. No NFC East team has repeated as division champs since the Philadelphia Eagles did it in the 2003 and 2004 seasons.

Despite the Eagles defending their Super Bowl title, there really is no guarantee that they will even make it back to the playoffs in 2018. Especially considering how unpredictable this division has been in the last decade.

Don’t worry, this is not about to be an article predicting the exact score of every game for each of the four NFC East teams in 2018. Instead, let’s take a guess at if these four squads will have a better or worse record during this upcoming season than they did in 2017.

Last season was full of distractions for the Cowboys and most of them were due to the never-ending fight Dallas running back Ezekiel Elliott was having with the NFL over a suspension. Elliott’s battle with the league last year led to him missing a bunch of practice and not performing even close to the level he displayed on the field during his rookie season in 2016.

Despite not knowing if their starting running back was going to play or not every week, the Cowboys were still able to come out of 2017 with nine wins. Dallas was able to finish with a winning record last season thanks mostly to the play of two of their best young performers in quarterback Dak Prescott and defensive end Demarcus Lawrence.

For 2018, Prescott and Lawrence will be returning and the Cowboys will have the luxury of Elliott no longer dealing with any off-the-field issues. Dallas also added a free-agent wide receiver in Allen Hurns this offseason who should drop fewer passes than Dez Bryant.

The Cowboys still have to figure out how to make up for the production lost from Jason Witten’s retirement this year. But outside of that, Dallas should not have a ton of trouble winning more than nine games in 2018.

Even though they only won three games last season, the Giants have endured a lot of much-needed change this year thanks to their forgetful performance in 2017.

New York replaced their silly, gym teacher-looking head coach from last year with a determined Pat Shurmur. They added a very talented running back in last April’s NFL Draft in Saquon Barkely and Giants wide receiver Odell Beckham is expected to be fully recovered from his ankle injury in time for the beginning of the 2018 season.

If Shurmur can squeeze out any sort of production out of aging New York quarterback Eli Manning and the Giants’ defense can actually learn how to tackle, don’t be surprised to see them back in the playoffs this year. No, really.

As is the case with any team coming off a season that ended with them winning a Super Bowl, the Eagles are going to have a gigantic target on their back in 2018. How they respond early in the year will likely determine how the rest of their season goes.

Philadelphia lost a couple key players from their 2017 roster this year. But for the most part, many of the players that helped the Eagles win the Super Bowl last season will be returning in 2018.

Even if quarterback Carson Wentz doesn’t have any lingering effects from the torn ACL he suffered last year, the Eagles could still struggle to be as successful in 2018 as they were last season. Expect them to remain as one of the top teams in the NFC in 2018, but with slightly fewer wins than what they had a season ago.

During the upcoming season, the Redskins are really going to find out how much former quarterback Kirk Cousins meant to their team achieving any sort of success over the last three years.

Washington did replace their former signal caller with Alex Smith this offseason. But is Smith capable of putting an entire offense on his back like Cousins had to frequently do during his time with the Redskins?

Rookie running back Derrius Guice is a guy to keep an eye on that could take some of the pressure off of his quarterback’s shoulders in 2018. Guice definitely has the talent to become just the third Washington rookie in team history to rush for at least 1,000 yards in a season.

On the defensive side of the ball, the Redskins still have a handful of playmakers including Josh Norman, Zach Brown, and Ryan Kerrigan. However, many of the same players from a defense that finished last in the NFL at stopping the run a year ago are returning in 2018 too.

The team’s downgrade at quarterback and their lack of improvement on defense this offseason likely means that 2018 is not going to be an enjoyable season for Washington.