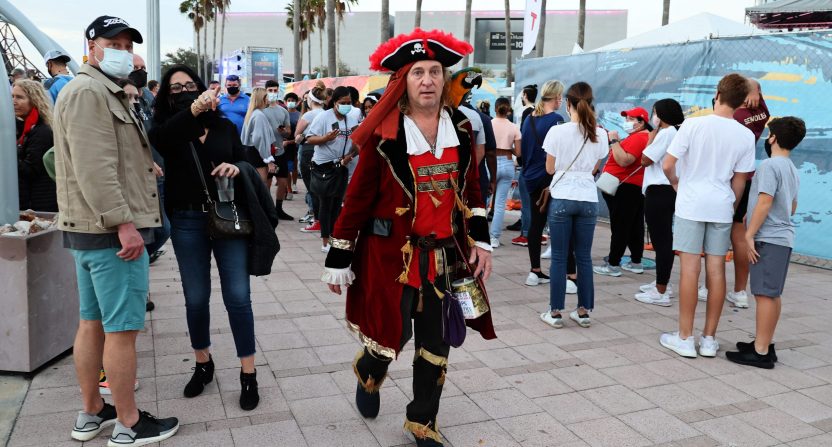 The Kansas City Chiefs are the defending Super Bowl champions and they’ve got Patrick Mahomes at the helm and Andy Reid on the sidelines. On paper, all signs would point to them defeating the Tampa Bay Buccaneers in Super Bowl LV on Sunday.

But in reality, the Chiefs have a few things working against them. Most notably, multiple players on the team have been quarantining or already placed on the reserve list after coming into contact with a barber who tested positive for COVID-19. The team is also dealing with the emotional fallout of a multi-vehicle crash involving Kansas City Chiefs assistant coach Britt Reid, son of Andy, which sent two children to the hospital. There’s also the notion that it’s extremely hard to repeat as champions in the NFL. Oh and there’s this guy on the other sidelines named Tom Brady who tends to win a lot of Super Bowls.

All of which seems to have made the Bucs the big-money favorite on Sunday, at least with the high rollers.

Mattress Mack, otherwise known as Houston furniture store owner Jim McIngvale, placed a $3.46 million bet on the Buccaneers getting 3.5 points. If the Bucs win by four to more, he stands to win $2.72 million. In a way, Mack is actually just hedging his business bet as any customer who spends $3,000 or more on a new mattress with Mattress Mack will get their money back if the Buccaneers beat the Chiefs.

BetMGM is also reported that someone is wagered $2.3 million on the Bucs, also getting 3.5 points. If the Bucscover, this person will walk away with $2 million.

And now, David Purdum of ESPN.com is reporting that someone placed a $1 million money-line wager on Tampa at MGM in Nevada. This bet has no point spread but it does come with +135 odds, so it will pay out $1.35 million if the Bucs win.

So, just in case you are still looking for a rooting angle for the Super Bowl and you like seeing rich people lose money, consider yourself a Chiefs fan.

In case you’re wondering, Purdum noted that none of these bets match the all-time high in a U.S. sportsbook. That goes to the person who placed a $4.8 million money-line wager on the Rams to beat the Patriots in Super Bowl LIII. It did not pay out.