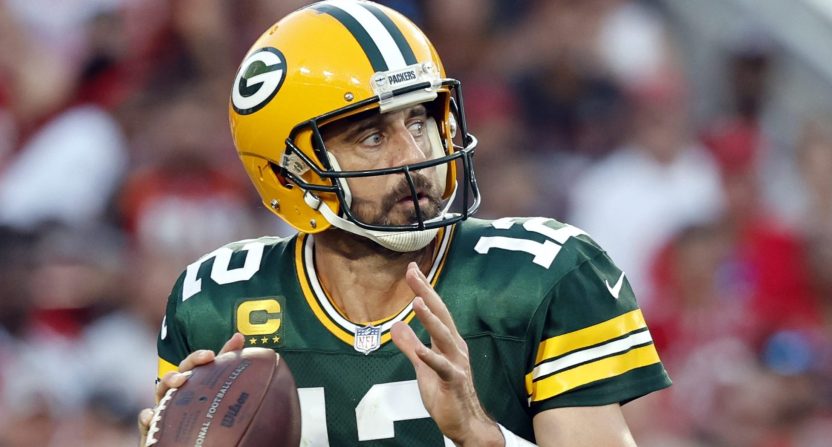 New England Patriots head coach Bill Belichick has been around the NFL for quite a while and has seen a lot of different star quarterbacks. But you won’t find him talking about many players the way he talked about Green Bay Packers quarterback Aaron Rodgers on Wednesday.

During his press conference on Wednesday morning, Belichick offered high praise for his upcoming opponent.

“He’s seen it all a million times,” Belichick said of Rodgers, according to Pro Football Talk. “They don’t turn the ball over. He doesn’t make many mistakes — he never has. He’s a very resourceful quarterback. He makes the plays that are there and he makes a few plays that really aren’t there. And then he rarely makes a mistake where he has a bad play. There’s very, very few of those.

“I think that’s one of the things that makes him a great quarterback. He’s got a great arm, he’s got great touch. He’s accurate. He helps the team win. He does the things they need to do to win. And he makes some plays that there’s not many guys that could make. But, he doesn’t try to do that all the time and makes good decisions. Certainly, very protective of the ball and the operation of the offense. He’s got a lot of freedom — which he should. And he makes a lot — a lot — of good decisions.”

While Belichick was happy to talk about Rodgers, he certainly wasn’t nearly as interested in talking about the status of his own quarterback, as he got a little testy with reporters asking about Mac Jones’ injury.