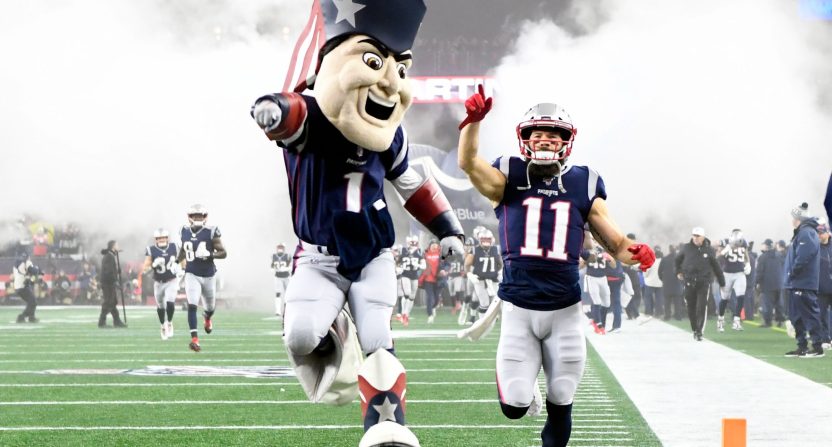 Former New England Patriots star receiver Julian Edelman has often been seen workout out with former teammate Tom Brady this offseason and previously entertained the possibility of an NFL return.

Edelman’s first comments on a potential return occurred in June, but he doubled down on the possibility last week in an interview with NFL insider Rich Eisen.

“I’ll tell you right now, if I had three weeks, three maybe four weeks, start of the season, absolutely not,” Edelman said. “But if there’s a team vying for a playoff run, guy goes down, could I get ready? I mean, I probably could.”

The 11-year NFL veteran also revealed that if a comeback were to happen, he would like to return to Foxborough instead of teaming up with Brady in Tampa Bay.

Word of this potential NFL return appears to have got back to Patriots head coach Bill Belichick, as he discussed the possibility in an interview with WEEI 93.7, a Boston sports radio show.

“I’ve talked to Julian, I talk to him fairly regularly,” Belichick said. “So, yeah, I don’t know about him talking to Rich Eisen and all that. You’d have to ask Julian about that, but I don’t know.”

Edelman also has a ton going on outside of football at the moment, working in a media role with Paramount+ on Inside the NFL as a studio analyst.

It certainly seems like it would need to be the perfect situation to lure Edelman out of retirement, and it would likely be deep into the NFL season as teams get closer to the playoffs.

This may just be an idea for Edelman, but it could also be something worth monitoring in New England as the season goes on considering Edelman’s close relationship with Belichick.