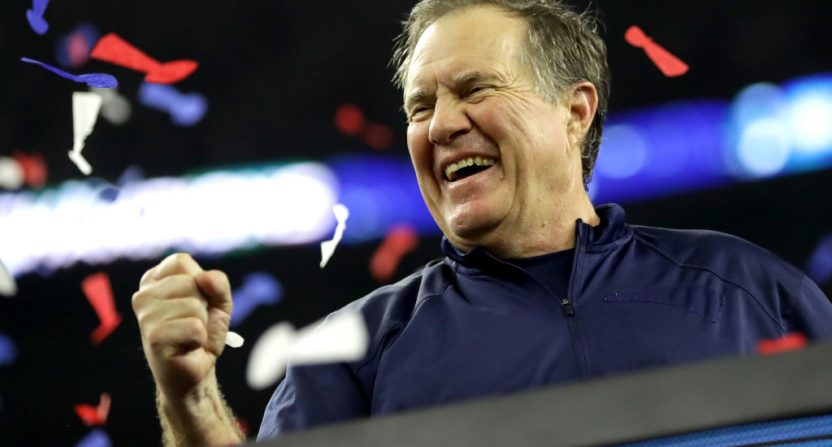 Bill Belichick would probably not leave the Patriots for the Giants. That’s the short answer to the question posed in the headline, and it’s also probably what you expected yourself. So congratulations, if so, because you’re right, or as right as I’m allowed to say you are as someone with no inside knowledge of the situation in New England.

This is a topic thanks to two reports, the first being the widely-publicized ESPN expose from Seth Wickersham into the crumbling nature of the Patriots dynasty, the logical flaw there so obvious that even our dullest observers were sharp enough to point it out:

That’s not to say the report wasn’t fascinating; it really was, and featured plenty of hilarious moments, my personal favorite being the idea that Tom Brady is pouting this year because he hasn’t received the NFL equivalent of the paper star my second-grade music teacher would hand out every week:

Patriots staffers have noticed that, this year more than ever, he seems to volley between unwavering confidence and driving insecurity. Brady has noted to staff a few times this year that, no matter how many game-changing throws he makes, Belichick hasn’t awarded him Patriot of the Week all year.

That Tom Brady, lock Hall of Fame player, a contender for greatest quarterback ever, and owner of five Super Bowl rings, would whine about not winning Patriot of the Week is the best evidence yet that playing sports for a living tends to leave athletes locked in a state of arrested development. He’s 40 years old and moreover he’s Tom Brady, and this is what we’re talking about.

But back to Belichick and the rumored potential outcome of a return to the New York Giants. That was kicked around online in the wake of the ESPN report, and there were a few mentions of the Bears as another possible candidate, but nothing beyond idle speculation hit the wire until this report from Gary Myers of The New York Daily News.

“I’m sure Bill knows this is his last chance to be the Giants coach,” a source close to Belichick said Friday. “Bill sees an opening – an opening to get to the Giants.”

The source said he’s not certain if the reported friction and tension in New England will prompt Belichick to force his way out, but if he does, he said he is certain, “The Giants are the only place he wants to be.”

This obviously needs to be taken with a massive grain of salt, because any reporting from the New York papers with a headline like that is going to drive a ton of traffic, and it’ll probably dominate the talk radio there for a few days, until Belichick is eventually forced to deny interest or the Giants hire someone else. And if that happens, it’s not like the report is so strong that there will be any blowback to Myers for writing it.

It’s not a nonzero chance, though. Bob Kraft is certainly not leaving. Tom Brady clearly doesn’t want to leave before he retires, and the most fascinating part of the ESPN piece was the section on the Jimmy Garoppolo trade to the 49ers, which did really seem like Kraft and Brady ganging up on Belichick to force his hand and remove any leverage he might have had as to who should be the quarterback going forward.

Belichick isn’t as limited by age as Brady, career-wise, and he’s not tied to one team like Kraft. Leaving New England and transforming another organization, maybe even winning a title elsewhere (without Brady), might hold an appeal for someone like Belichick. (That is, an egomaniac with a bitterly competitive personality.)

Again, none of it is likely. But the Patriots have been the center of the NFL for nearly two decades now, and the reaction to these stories has proven that until now, no one really spent a lot of time contemplating what the end of their dynasty might look like. It’s tough to remember or imagine the sport without Brady and Belichick together, at this point. Anything that would see them apart seems weird to us.

But it’s going to happen at some point, obviously. It always does. Let’s hope for the most entertaining route, which would clearly be all-out implosion, leaving Bob Kraft and his endless supply of contrast collar dress shirts with neither Belichick or Brady.