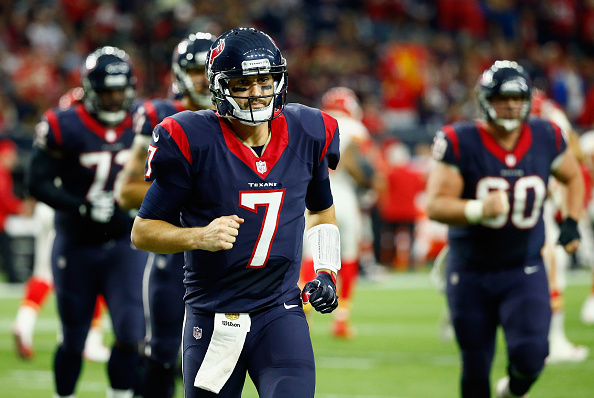 The Houston Texans were blanked by the Kansas City Chiefs, 30-0, in the AFC Wild Card Playoffs on Saturday. Athe game falling more and more out of reach for the Texans, head coach Bill O’Brien never made a quarterback change. O’Brien was going to ride with Brian Hoyer no matter what, and that may be a suggestion O’Brien knows he needs a major upgrade at the position moving forward.

Hoyer was intercepted four times by the Chiefs and he lost a fumble in the defeat. After the game, O’Brien said he never considered making a change, despite Hoyer’s struggles.

“I named him the starter,” O’Brien said. “With the game plan and the amount of reps that Brandon had gotten during the week, which was basically nil, I felt like the right thing to do was stick with Hoyer.”

To his credit, Hoyer knows he had an awful game, but he felt it was important to stay in the game instead of looking for a way out of the disaster.

“Those guys that were playing out there deserve for me to finish that game,” Hoyer said after the game. “For me to cop out, it would just show a lack of being a man and a lack of leadership.”

Hoyer’s path to being the starter for Houston is nothing short of admirable, but it is clear the Texans are among the number of teams in dire need of a franchise quarterback to build around in the future. Odds are O’Brien would like to pick one up in the draft this spring if possible so he can begin working on molding his offense with his hand-chosen quarterback of the future. Hoyer is not going to be that guy, and neither will Brandon Weeden or TJ Yates or Tom Savage.

What complicates things a little bit more is the fact the Texans players also see a need to upgrade at QB. Wide receiver DeAndre Hopkins made that point pretty clear after the game, shrugging aside the idea Kansas City had brilliant coverage.

“Do you think I was open?” Hopkins said when asked if he was open. “I mean you watched the game. I just run my routes.”

He continued with some reaction on Hoyer and his performance…

“He is a grown man,” Hopkins said. “I can’t sit here and say I feel sorry for a grown man. You learn and this is football, you make mistakes. I don’t feel bad for him because I know he is going to move on and be a better player from this game.”

Oh boy. The good news may be there will be some quarterbacks available in the NFL Draft that should interest O’Brien. One of those potential options just so happens to be Christian Hackenburg, a player he once recruited, which is going to lead to plenty of Chip Kelly-Marcus Mariota-esque NFL Draft buildup in the next few months.

The Bill O’Brien-Christian Hackenberg reunion in Houston is going to be pretty fun to watch.