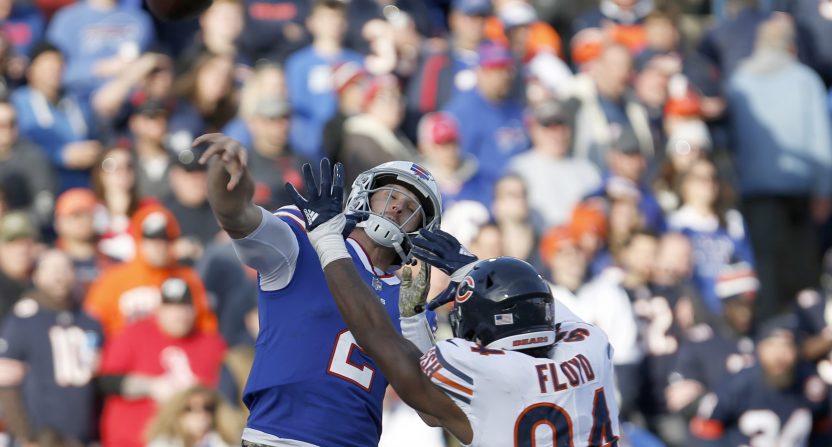 Thanks to a Derek Anderson injury, Nathan Peterman got another chance to be a starting quarterback for the Buffalo Bills. Peterman’s play has left nothing to be desired and has seemingly specialized in throwing as many pick sixes as touchdowns.

Nothing changed today as the Bills lost 41-9 to the Chicago Bears. Peterman went 31/49 which is a respectable 63 percent completion percentage. Peterman also threw for 189 yards which isn’t a great day but it wasn’t bad either. It was also the first time Peterman broke 100 passing yards in a game. But when combined, Peterman averaged less than four yards per attempt. And that’s tough to do in today’s NFL. Running back Chris Ivory averaged more yards per carry than Peterman’s yards per attempt.

Another glaring stat that people have identified with Peterman has been his interceptions. Peterman threw three picks with one returned for a touchdown. In fairness to Peterman, while he didn’t place those passes for his receivers that well, two of those interceptions were the result of receivers keeping the ball in the air and providing an interception for the Bears.

This kind of pick always brings back flashes of Polamalu 👀 pic.twitter.com/W5Hsznh1Ls

At some point, you almost have to feel bad for Nathan Peterman. It’s not his fault he’s getting playing time. Circumstances involving the other quarterbacks getting injured and the Bills not getting someone better is causing Peterman to be in this situation and even if Peterman deep down knows he’s terrible, he’s not stupid enough to tell Sean McDermott to bench him.

But the stats speak for themselves and Nathan Peterman is a man who is masquerading as an NFL quarterback. Watching him play is like watching Sharknado. You’re watching Peterman for the unintentional entertainment of how bad he’s playing and wondering what will happen next. Here is Peterman’s career regular season stats:

You could argue that Peterman had his best game today but what does that say when somebody’s best game in his career was a 41-9 loss? I have nothing against Nathan Peterman as a person and I know he’s a way better quarterback than the average person but he plays in such a way where I can’t help but think that I couldn’t do any worse if I was in the backfield. At the very least, Uncle Rico could do better.

I’m not Sean McDermott but if Derek Anderson remains out, what does it hurt to make newly signed receiver Terrelle Pryor the quarterback until Anderson or Josh Allen does come back? Yes, Pryor is a converted wide receiver and hasn’t been a regular quarterback in years but he can’t be any worse. The newly released Sam Bradford can also be an option, until he inevitably gets hurt and Peterman gets another chance. The Bills are a mess and if I’m Nathan Peterman, I say keep cashing those checks until the team comes to their senses and decides to release you.