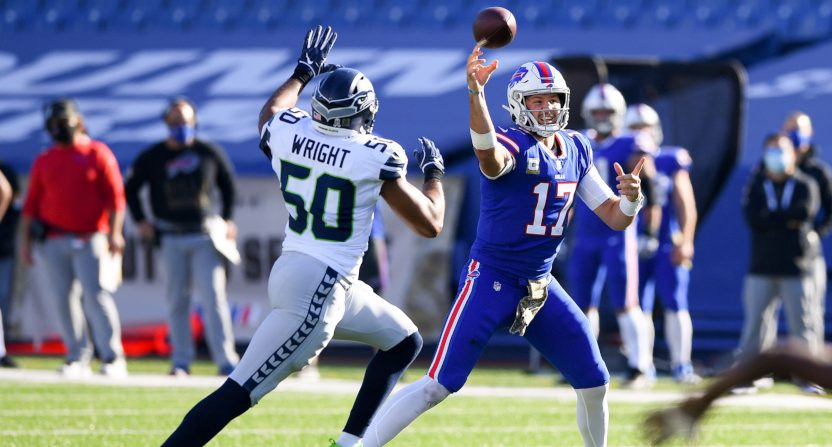 One of Sunday’s most-anticipated matchups came from the 6-1 Seattle Seahawks travelling to face the 6-2 Buffalo Bills, and that matchup certainly produced a lot of points. Buffalo came out with a 44-34 win, led by quarterback Josh Allen (seen above throwing a second-quarter pass against K.J. Wright). Allen completed 31 of 38 passes (81.6 percent) for 415 yards and three touchdowns with no turnovers, and he also ran for another touchdown. But after a slow start that included two interceptions and a fumble, Russell Wilson (getting a lot of buzz in MVP discussion this year) led a Seattle comeback that made things interesting late. It fell short, though (partly thanks to another Wilson fumble), and the Bills handed the Seahawks their second loss of the season.

This was all Buffalo early, with the Bills scoring on their first two drives and the Seahawks punting on their first drive, then throwing an interception that set up a Buffalo field goal on their second. That gave the Bills a 17-0 lead early in the second quarter.  Seattle pulled a touchdown back with a 60-yard drive after that, but Buffalo scored again on a 75-yard drive, which featured two consecutive 21-yard passes from Allen to Stefon Diggs. The Seahawks got a field goal after that, and the Bills missed one, making it 24-10 at the half.

.@JoshAllenQB tosses his 3rd TD of the day!

In the third, the Bills had several chances to really seal this away. Wilson fumbled on the first drive of the half and Buffalo got the ball at the Seattle 23, but a sack and a penalty pushed them back to the 40. Allen then hit Gabriel Davis for 39 yards, setting up first and goal at the one, but a Seahawks’ defensive stand held the Bills to a field goal. Seattle then cut the deficit to 10 points with a 75-yard touchdown drive, then forced a punt, and then pulled within seven on a field goal, but Buffalo responded with a nine-play, 81-yard touchdown drive. Wilson’s second interception (by Tre’Davious White, who returned the ball 25 yards to the Seattle three) then gave the Bills a short field, and Allen ran that one in himself, giving Buffalo a 44-20 lead inside the final 10 minutes.

Josh Allen calls his own number!

The Seahawks have been known for their comebacks, though, and they managed to get this a lot closer. Wilson took them 75 yards in 48 seconds on the next drive, capping that with a roll and deep throw to David Moore for a 55-yard touchdown:

Russell Wilson throws the best deep ball in the game and it isn’t even close.

So that got Seattle within 14 with just under nine minutes left. And the Bills couldn’t kill much clock on their next drive and had to punt. But Wilson was then sacked and fumbled at his own 19, and while Buffalo only got a field goal out of that, that took more time off the clock and made it 44-27 with just over four minutes left.

The Seahawks weren’t quite done, though. Wilson led a seven-play, 75-yard touchdown drive in just 2:22, capping that with a short pass to DK Metcalf. That made it a 10-point game with 1:51 left. However, Seattle couldn’t recover the onside kick, and three runs from Zach Moss and a Seahawks penalty iced the win for Buffalo.

On the day, Wilson still finished with a respectable stat line, completing 28 of 41 passes (68.3 percent) for 390 yards and two touchdowns. But the four turnovers hurt, as did Seattle’s inability to stop Allen; any time you let an opposing quarterback complete more than 80 percent of their passes and throw for more than 400 yards, it’s pretty tough to win.

At any rate, this was a thrilling showdown between two of the NFL’s best teams so far this year. And the Bills certainly looked good against a tough opponent, and the Seahawks showed some weaknesses. It will be interesting to see where they both go from here.