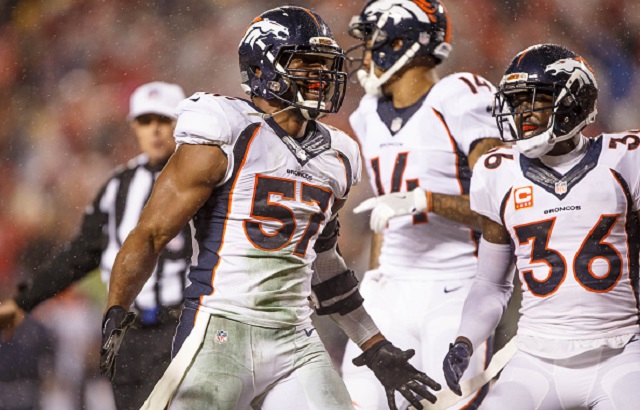 The hallmark of the Denver Broncos, at least since 2012, has been their defense. Sure, there were the halcyon years of quarterback Peyton Manning’s captaining an historically effective offense prior to his retirement, but the ability to limit opposing offenses has been the one constant. Built around pass-rusher Von Miller up front and cornerback Aqib Talib in the secondary, it has been one of the most elite units in the league.

But something changed in 2016, something that ultimately doomed Denver’s playoff hopes just months after winning their latest Super Bowl: The defense simply wasn’t the same.

Denver’s masterful pass-rush and pass defense is still in place. The Broncos rank sixth in yards per game allowed mainly because they rank first in passing yards per game, with opponents averaging only 187.2. Their 40 sacks ranks third in the league, led by Miller’s 13.5.

The defense is also still generating takeaways, with 10 interceptions tying them for 12th in the league. And it has also improved in allowing touchdowns to opponents in the red zone; opponents’ touchdown scoring percentages have dropped from 56.52 in 2015 to 52.38 in 2016. But the big change has been against the run, a slow leak that turned into a flood of opponents’ rushing yardage raining down on them.

In 2015, the Broncos were third in the league in rushing yardage allowed, at 83.6 and allowed 13 rushing touchdowns to opposing offenses. In 2014, the defense was second against the run, allowing an average of 79.8 yards per game. This year, it ranks just 29th, averaging 135.2 yards given up on the ground. Ten times this season, the Broncos have yielded 120 rushing yards or more, compared to twice in 2015 (with seven of 100-plus) and four in 2014.

The most recent failure to stop the run game against the Kansas City Chiefs in Week 16. The Chiefs managed 238 rushing yards in a 33-10 Broncos loss that knocked Denver out of the postseason. Tyreek Hill accounted for 95 of those yards and a touchdown, while quarterback Alex Smith had 46 yards and a score on his four runs. Spencer Ware added 62 rushing yards, along with 35 from Charcandrick West.

Changes in personnel, along with key injuries, are to blame. Denver had the tough task of trying to replace Malik Jackson and Danny Trevathan in their front seven after the two left in free agency, landing pricey deals from the Jacksonville Jaguars and Chicago Bears, respectively. That left Denver to tap Vance Walker, free-agent signing Jared Crick and in-house veterans Todd Davis, Corey Nelson and Derek Wolfe to serve as their successors. But Walker suffered a torn ACL in training camp, ending his season. Crick was thus promoted to full-time starter, while Davis has done most of the work at Trevathan’s former linebacking spot.

These have become downgrades in Denver. According to Pro Football Focus, Crick ranks only 113 among interior defenders (out of 125), while former Bronco Jackson is tied for 14th. Davis has fared better in the rankings at linebacker, coming in at 37 (compared to Trevathan at 29th) and is 10th against the run, but it hasn’t been enough. Football Outsiders’ metrics has Denver’s defensive front ranked a mere 29th against the run. Last year, it ranked third.

Other in-season injuries have also hindered the Broncos’ run-stopping efforts. Beyond Walker, linebacker DeMarcus Ware has recently been placed on injured reserve with a back injury and had only appeared in 10 games this season. Fellow linebacker Brandon Marshall has been battling through hamstring issues that have kept him off the field for four games this year. Key run defenders have either moved on or spent notable stretches of time sidelined with injuries, and both can be blamed for Denver’s rapid increase in rushing yardage allowed.

There is a domino effect that occurs when teams can run at will against a defense. For one, it leaves the defense on the field longer, tiring the players out. It also gives opposing offenses the chance at holding the time of possession advantage; for example, Denver’s opponents have averaged 32 minutes of possession this season, with only three defenses on the field more often.

While teams facing the Broncos this year have averaged only 19.4 points per game — the seventh-fewest point total in the league — Denver’s offense is averaging only 20.6 points themselves, down from 22.2 a year ago. Just a few seemingly minor changes in time of possession can create significant changes in both Denver’s and their opponents’ scoring. And that thinner point margin from a season ago has been a factor in the Broncos’ record currently being 8-7, compared to 12-4 in 2015. Struggling to stop the run has directly led to this chain of events.

While Denver’s defense as a whole is still quite robust, the issues with stopping the run need to be addressed in 2017. The Broncos need to avoid their incredible prowess at defending the pass continuing to be chipped away via opponents exploiting the run defense’s weakness.The return of Walker, Ware and Marshall to full health will certainly be significant steps toward improvement. Because without improvement, Denver’s roaring defense may become nothing but a whimper in short order.