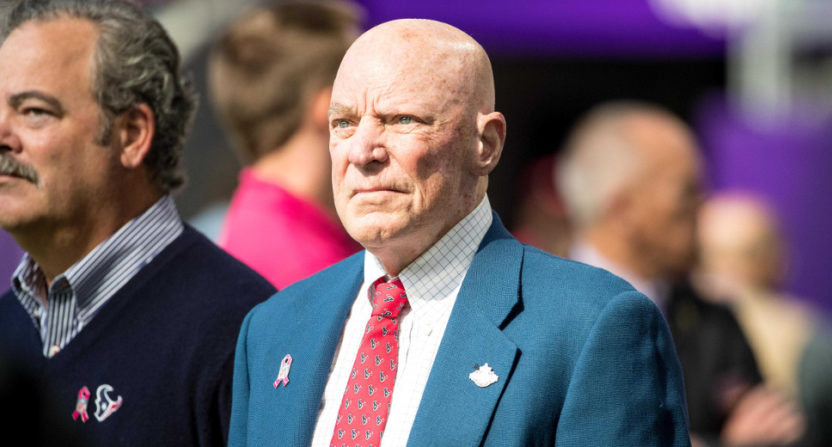 Houston Texans’ owner Bob McNair has been known for controversial comments in the past, including his “We can’t have the inmates running the prison” remarks about NFL player protests last fall that led to league-wide protests expanding dramatically. And at the NFL owners’ meetings Sunday, McNair made a couple of further comments that created some headlines. First, on the protest front, he told Mark Maske of The Washington Post that the league is “going to deal with it” and said “our playing fields, that’s not the place for political statements”:

“I think we all need to respect our flag and respect our country. I think we’ll figure out a way to make sure that we do that. We’ll have discussions about it.”

…“We have a policy manual now that says they must be on the sideline and they should stand and hold the helmet in their left hand,” McNair said. “I interpret that to mean that’s what they should be doing.”

“The union argues well, if you really meant it, you’d say must,” he said.

The owners are expected to discuss protests at this week’s meetings, but no vote is scheduled. Giants’ owner John Mara told Maske a new policy and a vote could come at the owners’ next scheduled meetings in May in Atlanta, and that it would be difficult to change things ahead of this season after those meetings. Meanwhile, Jets’ owner Christopher Johnson said “I can’t speak to how other people run their teams, but I just think that trying to forcibly get the players to shut up is a fantastically bad idea.” So the owners aren’t all in agreement on what action, if any, to take around protests at this point. But it does seem that McNair is one of the figures pushing for decisive action to try and stop protests during NFL games.

Beyond that, McNair made some headlines for his comments about Panthers’ owner Jerry Richardson, who is selling the team following accusations of sexual harassment, sexual misconduct and using a racial slur. Those accusations led to the league hiring an independent investigator to examine Richardson’s conduct. Richardson is not at the meetings, with the Panthers instead represented by COO Tina Becker. In comments to Joseph Person of The Charlotte Observer Sunday, McNair defended Richardson:

“I hope this thing turns out that he’s innocent. They alleged. I don’t know,” McNair said at the NFL annual meetings. “Some of the comments he might have made could have been made jokingly and misunderstood. I’m sure he didn’t mean to offend anybody.”

…McNair said his sense is Richardson regrets agreeing to the settlements rather than attempting to shoot down the allegations.

“Sometimes people choose to try to make something go away rather than fighting it. I think his regret is he didn’t fight some of these things,” McNair said.

“We get confronted with it, too, where people will allege something. They get lawyers and what they do is come out and threaten you and your legal counsel and your insurance people say, ‘Well, it’s going to cost you X-number millions of dollars to defend this. And if we can settle it for this …’”

McNair is right that settlements aren’t necessarily proof of the accusations that led to them, and that sometimes it can be both more expensive and more damaging to try and fight allegations publicly. However, this is quite the attempt to make light of the accusations against Richardson, accusations that are currently the subject of a NFL-commissioned investigation, and comments “made jokingly and misunderstood” is not really an excuse for bad workplace behavior. As with his protest comments, these remarks from McNair may not be that well-received.