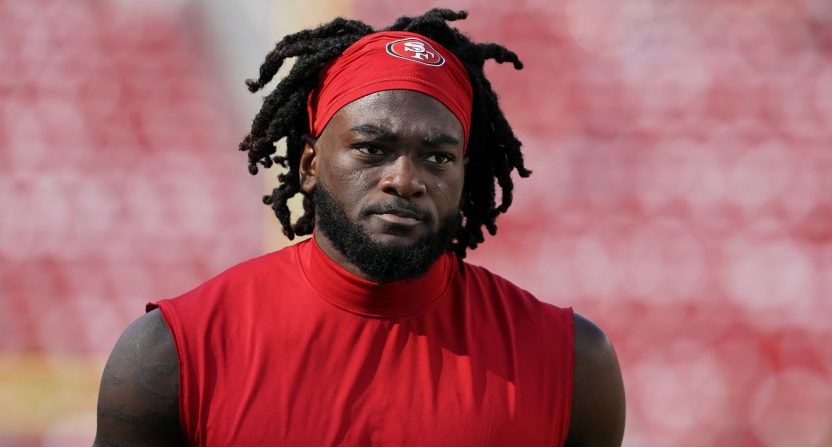 Something has been going on between the San Francisco 49ers and wide receiver Brandon Aiyuk all season long.

Aiyuk, the second-year receiver out of Arizona State, caught 60 passes for 748 yards and five touchdowns while also rushing for two scores in 2020. Aiyuk was expected to be a big part of the Niners’ offense again this season but he didn’t start in Week 1 and there was a lot of speculation that he was in head coach Kyle Shanahan’s doghouse. Shanahan said at the time that Aiyuk was not in the doghouse but also made it clear that he felt like the wide receiver needed to “refocus.”

Since then, Aiyuk has played more but his production is nowhere near what it was last year. His best game on the season so far was Week 3’s loss to the Green Bay Packers in which he logged four receptions for 37 yards and one touchdown, his only score on the year so far.

Whether Aiyuk is doing something wrong or Shanahan is keeping him from getting touches for some reason, it’s clear that there’s a problem. And now 49ers general manager John Lynch is wading into the discussion. Lynch told KNBR during a recent appearance that “it’s time” for Aiyuk to get back on track.

#49ers John Lynch says 'it's time' for Brandon Aiyuk to break out of sophomore slump (eight catches in 2-3 start)https://t.co/XoOKaXEAUv

“The bottom line is we each have to find a way — I’m talking we as a team and Brandon as a player — because for us to get where we want to get, we need his talent and abilities on the field,” Lynch said.

“Having said that, it’s important you earn your opportunities. You do that during the week. It’s not as if Brandon isn’t working hard. For whatever reason, he hasn’t made the strides we expect him to. We probably hold him to higher standards because he has so much in his body”

He’s a very talented young man and a hard worker, as well. We’ve gone to great lengths to explain kind of what the predicament is right now,” the GM added.

Lynch joins Shanahan in giving very contradictory statements about what’s going on with Aiyuk. They both say that the issue isn’t specific to Aiyuk but then immediately make comments that put the onus on Aiyuk to step up and do more. It’s very confusing unless you go with the most logical conclusion, which is that the franchise doesn’t feel as though Aiyuk is pulling his weight.

For his part, Aiyuk has said he’s ready to bounce back. He’s got a bye week to work some things about hopefully he and the Niners can get back on the same page when they return to play against the Indianapolis Colts on October 24.