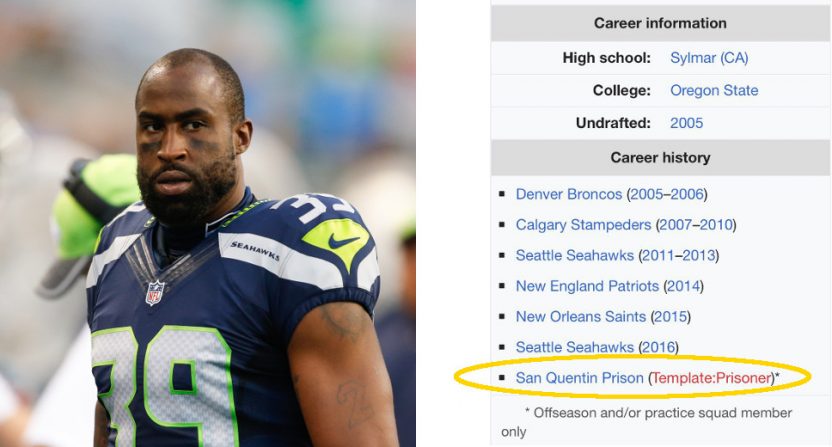 Brandon Browner, formerly a defensive back with the NFL’s Denver Broncos, Seattle Seahawks, New England Patriots and New Orleans Saints and the CFL’s Calgary Stampeders, was arrested Sunday in Los Angeles County after accusations of kidnapping and burglary and a police chase. As per NBC Los Angeles, this all started Sunday morning in La Verne, a small city in the southern part of the county:

Officers in the La Verne Police Department responded to a call at 10:07 a.m. on Sunday morning related to a man who broke into a home through a locked window. Browner was identified as the intruder and allegedly physically forced the victim back into her residence when she attempted to flee.

The former NFL pro allegedly physically harmed and made threats to kill the victim inside the residence per the La Verne PD. Browner fled the scene before police arrived and is alleged to have taken a Rolex watch valued at $20,000 from the victim before leaving the scene.

In addition, Browner had a previous relationship with the victim and had previously been arrested for domestic violence and was restrained from the victim according to police.

This eventually led to a police chase, and to Browner being arrested near Azusa, CA (10 miles to the west down Interstate 210):

So I saw this chase end. Ended up being Brandon Browner from the Pats. So many chases end at the corner of my block lately haha pic.twitter.com/wKB8CWCvNN

This isn’t the first legal trouble for Browner. Last May, he was arrested for possession of a controlled substance (reportedly cocaine) and being under the influence. In September, he was arrested on suspicion of making criminal threats. This May, he was arrested on domestic battery and child endangerment charges, pled no contest, and was sentenced to probation. In June, he was found to have violated his probation from a previous case and was sentenced to 60 days in jail, but only served two before being released thanks to overcrowding in the Los Angeles county jail.

But on Saturday, just the day before this arrest, the 33-year-old Browner was playing flag football on NFL Network on Michael Vick’s “Roadrunners” team in the American Flag Football League tournament. Of course, despite his resume as a two-time Super Bowl champion and a one-time Pro Bowl selection, his chances of a NFL comeback were probably minimal even before this, as Browner last played in the league in 2015 with the Saints (he signed with the Seahawks in 2016, but was cut in training camp; he’s seen with them in a 2016 preseason game above). But it’s interesting that he was in this televised flag football tournament just a day ago. Any hope of a comeback after that seems like it would have been doused even further by this arrest, though.

We’ll see what comes of this, but it sounds like Browner’s in some pretty serious trouble. And someone on Wikipedia even edited his list of teams to include “San Quentin Prison,” as seen above. Here’s a look at how that page used to look (it’s since been scrubbed of that edit):