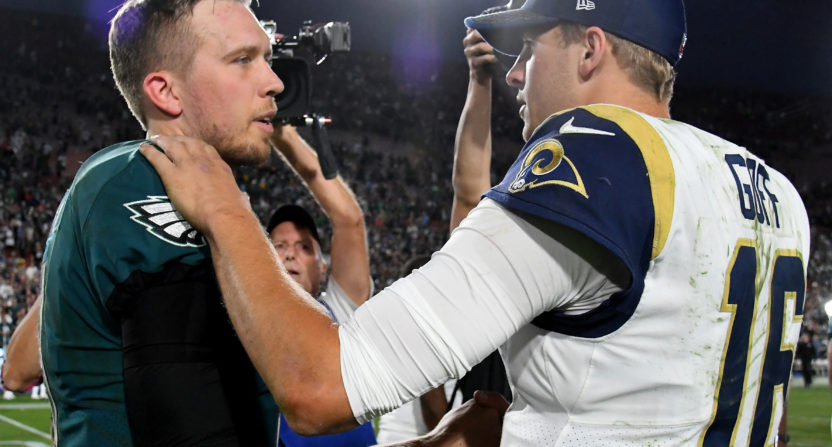 The 2017 NFL regular season is nearing its end, with each team down to its final three games. In both conferences, the top seed lost in Week 14, allowing a new team to take over the No. 1 seed and home-field advantage going into the playoffs.

With that in mind, let’s break down the NFL playoff picture following Week 14’s results.

Pittsburgh moves ahead of New England, and now only needs to beat the Patriots at home in Week 15 to clinch the top seed. And if the Steelers do win there, a Jaguars win over the terrible Texans would move Jacksonville into the No. 2 spot, ahead of New England. So yeah, this game is freakin’ huge.

The Jags are in good shape regardless, but Tennessee does have the tiebreaker there and the two meet again in Week 17. The Bills, Ravens and Chargers are fighting for that last wild-card spot, with Los Angeles also having a shot at the AFC West (they play the Chiefs, who own the tiebreaker, Saturday night).

The angry Patriots rarely lose back-to-back games. They’ll probably pound the Steelers on the road and then win out to take the top seed. But Pittsburgh is still likely to hang on and earn a bye. Jacksonville looks a lot better than Tennessee right now, the Chargers look at lot better than the Chiefs right now, and Baltimore has such a walk-in-the-park schedule that it’s hard to see them losing a wild-card spot. Buffalo isn’t for real and still has to play the Patriots, while Oakland and KC are fading.

All are fallible, and recent Super Bowl participants Carolina, Atlanta and Seattle are coming on strong (despite a tough loss in Jacksonville for the Seahawks). The Lions probably aren’t a threat, but the Packers could get Aaron Rodgers back this week and the Cowboys will get Ezekiel Elliott back next week. Is it too late for them?

I still think Philly holds on considering the finishing schedule and the competency of Nick Foles. Minnesota has to travel to Green Bay and New Orleans has to face Atlanta again, but their closing schedules aren’t bad either. They should hang on. I think the Seahawks beat the Rams to lock up their tiebreaker in Week 15, but still lose to either Dallas or Arizona while the Rams win out against Tennessee and San Francisco.

It’ll be tough for Carolina to hold on, and the tiebreakers don’t favor them or the Cowboys even if Dallas wins out. Atlanta will likely grab one wild-card spot and Green Bay would steal the other one under these circumstances. But really, the NFC wild-card race is a jumbled mess right now.