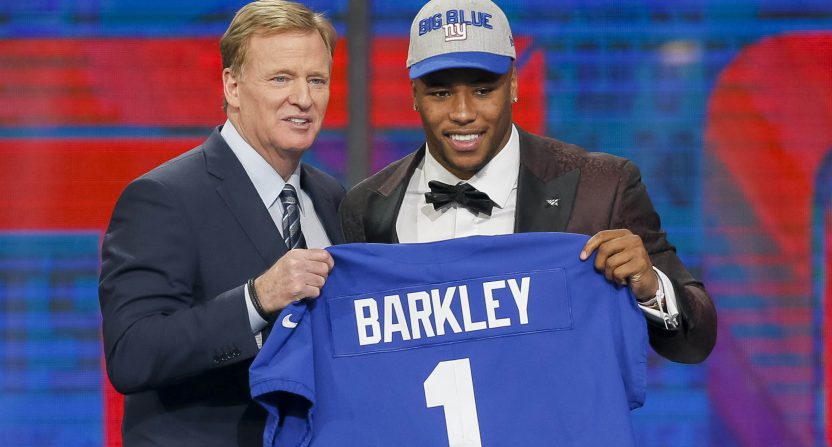 Now that the NFL Draft is in the books, the oddsmakers have been busy updating their numbers for the upcoming football season. Not content to just update the Super Bowl odds for each NFL franchise, the odds for who will be the NFL’s Offensive Rookie of the Year and how many games some rookie quarterbacks will start have now been set.

Bovada released their first batch of prop bets for the 2018 NFL season with a specific focus on some of the key rookie acquisitions in the draft. Let’s dig into a few of these figures and see if any are worth placing some early wagers on now or you’re better off waiting.

2018 Offensive Rookie of the Year

Running back Saquon Barkley is the early favorite to win the NFL’s Offensive Rookie of the Year award, and it is easy to see why. The No. 2 overall pick by the Giants has the potential to make some big plays this season and he may be the most likely player on this list to step into a major role in his new offense early on.

A running back has won the award in three of the last five seasons (Eddie Lacy in 2013, Todd Gurley in 2015, and Alvin Kamara in 2017), so the trend for a rookie at that position is favorable. While the quarterbacks on this list have some respectable odds, they may not have enough to edge past a running back for this year’s award. (We’ll dip into the quarterback prop bets soon.)

But if Barkley is not giving you odds you like, take a flyer on Rashaad Penny with Seattle. At 14/1 and on a team in search of a go-to running back, Penny could get some good opportunities.

At first glance, my gut instinct is to take the over on a number of these props. The one I would hesitate on is Josh Allen with the Buffalo Bills. That’s a high number for a quarterback I am far less sold on than the NFL scouts and draft analysts.

Baker Mayfield starting 10 games is likely to happen because the Browns don’t have anything to lose by getting him on the field as soon as they can. A concern might be Cleveland preferring to wait to play its next franchise quarterback as he is groomed for the starting job, but this is a Browns team that just started DeShone Kizer for 15 games in 2017. Does anyone really think Baker Mayfield isn’t starting by October? Give me the over for Mayfield.

A similar situation could take place with the New York Jets, where No. 3 overall pick Sam Darnold only needs to start six games to hit the over. That feels like an absolute steal, even if the Jets hold off on making Darnold the starter. Josh McCown likely begins the year starting for the Jets (he started 13 games for the 5-11 Jets in 2017), but it won’t take long for Darnold to breeze past the other QB options for the Jets (Teddy Bridgewater, Bryce Petty, and Christian Hackenberg).

For Josh Rosen, the 8.5 number might be one to consider going under. It’s not because Mike Glennon and Sam Bradford should be counted on to start the majority of the season in Arizona. It’s because Rosen has his own injury history that suggests he may not get through his first NFL season completely unscathed. He may be the most NFL-ready quarterback in this rookie class, but if Arizona takes their time getting him on the field, that could be an easy under.

How about Lamar Jackson needing to start just one game for the Baltimore Ravens? After trading up to get the last pick of the first round to acquire Jackson, it appears Baltimore could be preparing for the post-Joe Flacco era. Flacco has started all 16 games for the Ravens each of the past two seasons and has only missed starting a game six times in his NFL career (all in 2015), but the end of an era could be on the horizon. And if the Ravens are struggling down the stretch, the page could be turned. If you need just one start out of Jackson, you are probably going to get it.

The last time the New York Giants had a running back rush for 1,000 yards was in 2012 when Ahmad Bradshaw rushed for 1,015 yards. It has been a while for the Giants, but the expectations are high for Barkley.

Barkley rushed for at least 1,000 yards in each of his three seasons at Penn State, so the odds are pretty good Barkley will hit the century mark at the next level with the benefit of a couple of extra games to play. The Giants will be playing against some good run defenses this season, including the Eagles twice in division play. If Barkley stays healthy and gets going early as a key member of the offense, he should be able to scratch enough together to get to the 1,000-yard mark.

Eight rushing touchdowns may be more difficult, though, because Barkley could be used as a receiver inside the red zone to take away from some rushing touchdown opportunities. If it was eight all-purpose touchdowns, this might be easy money. Give the under a strong consideration here.

Which first-round wide receiver will have the more receiving yards in his rookie season? For now, the odds favor Moore of the Carolina Panthers (-145), while Atlanta Falcons rookie Calvin Ridley (+105) is the underdog. This is a tough call to make, and it may be too close to call for some.

For Moore, he will be given a chance to get involved in the passing game early on with the intent of making him a go-to receiver for Cam Newton. Being one of the top targets could result in a good amount of receiving yards. But in Atlanta, Ridley will catch passes from Matt Ryan, a 4,000-yard passer last season. The possible drawback for Ridley is he will be sharing passes with Julio Jones, the NFL’s second-leading receiver last fall with 1,444 yards. Carolina’s leading receiver, Devin Funchess, ranked 27th in the NFL in receiving yards.

Moore feels like the safer pick between the two, given these variables.

Bradley Chubb in a league of his own?

If you were wondering about the Defensive Player of the Year candidates among this year’s rookies, Bradley Chubb of the Denver Broncos appears to be a runaway favorite. Even though he was the second defensive player drafted (No. 5 overall) and Chubb is considered by some to be the best player in the draft, the oddsmakers currently have no interest in bothering with the Defensive Player of the Year.

Go ahead and place your bets wisely. And if you win any money by listening to my recommendations, I accept do PayPal and Bitcoin if you want to spread the love.