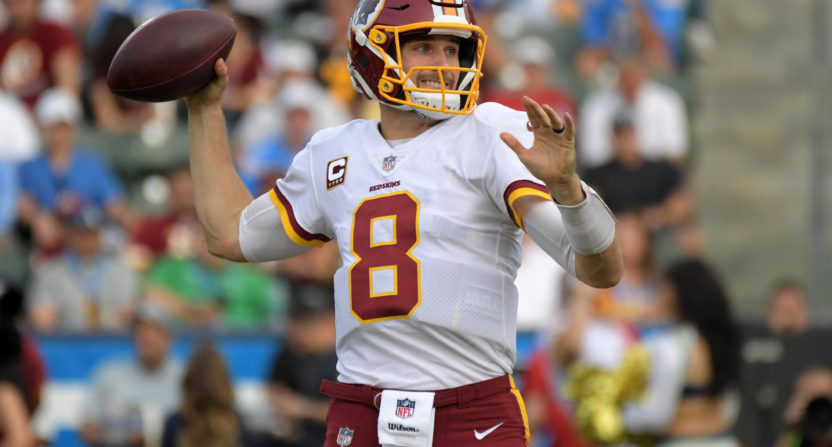 Looking ahead to the 2018 NFL offseason, it’s apparent that the quarterback carousel will be more intriguing than ever. Several high-ceiling veteran quarterbacks are slated to hit the open market or could become available via release or trade. And the draft contains several other potential starting-caliber prospects.

Here’s what we know about the NFL quarterback market right now:

Drew Brees: The biggest name on this list won’t be hitting the market. He’s staying in New Orleans.

Jimmy Garoppolo: His rookie contract is expiring after a red-hot late-season run with the 49ers, who almost certainly won’t let him go anywhere.

Kirk Cousins: He could be hit with another franchise tag, but there’s a good chance the Redskins opt instead to let him go. If that happens, a Pro Bowler who has the sixth-highest passer rating in football over the last three years will likely earn a huge long-term deal as a starter elsewhere.

Teddy Bridgewater: Huge upside if he can regain what he had going before suffering a grueling knee injury prior to the 2016 season. It’s not a good sign that he remains Minnesota’s No. 3 quarterback, but the potential is there.

Case Keenum: The career journeyman was “just another guy” before posting the league’s seventh-highest passer rating in a breakout 2017 campaign, helping the Vikings get to the NFC title game.

Sam Bradford: He set a new single-season completion percentage record in 2016 and looked stellar in Week 1 this season, but the former top pick then suffered yet another injury and missed virtually the remainder of the year. He’s a low-end starter who could still have at least an Alex Smith-like future.

Alex Smith: He was the league’s highest-rated passer in 2017, but the Chiefs might be ready to turn things over to 2017 top-10 pick Patrick Mahomes II. They won’t likely cut him with $17 million due in the final year of his contract, but a trade is a strong possibility here.

Tyrod Taylor: The Bills benched him midway through the season. And while he quickly regained the starting job and helped Buffalo get back to the playoffs for the first time this century, Taylor’s ugly wild-card performance against Jacksonville could spell the end. It’s easy to drop him prior to the final year of his contract.

Nick Foles: Starting in place of Carson Wentz, Foles has put on a show this postseason in order to lead the Eagles to the Super Bowl. Another strong performance against the Patriots on the largest of stages could make Foles a hot commodity on the trade market. He’s owed only $7 million next year.

Eli Manning: It looks as though the Giants are sticking with the 37-year-old, even though it’s clearly time to move on.

Quarterbacks who will be available in the draft

Josh Rosen: The UCLA product is an NFL-ready pocket passer with top-notch mechanics.

Sam Darnold: The USC product has a hell of a touch but has been turnover-prone.

Josh Allen: The 6-foot-5 Wyoming product has the look of a future franchise quarterback but may need time.

Baker Mayfield: The Oklahoma product might not have the physical traits everyone wants in a franchise signal-caller, but he might be the biggest playmaker in this class.

So that leaves us with as many as 15 or 16 quarterbacks up for grabs. Now, who might need/want them?

Washington Redskins: Depending on what happens with Cousins.

Minnesota Vikings: They’ll likely have to choose between Bridgewater, Keenum and Bradford.

Buffalo Bills: Depending on what happens with Taylor.

New York Giants: Depending on what happens with Manning.

Saints re-sign Brees, draft a quarterback in the first round: Maybe it’s one of the four I mentioned, or maybe it’s Lamar Jackson. It’ll be somebody, because it’s time the team identifies Brees’ potential successor.

49ers re-sign Garoppolo: It’s clear it’ll either be that or the franchise tag.

Redskins drop Cousins, trade for Smith: I think it’s time for all parties to move on, and Smith can do the same thing for less money.

Vikings re-sign Bridgewater: He’s the guy Rick Spielman drafted, and he’s got the highest ceiling. If it’s going to be one guy, it’ll be him.

Bills keep Taylor, trade for Foles: I don’t think they care to groom a quarterback right now, and would rather pit Taylor and Foles against each other in training camp.

Giants keep Manning, draft a quarterback in the first round: Could be Rosen, Allen or Darnold.

Jets sign McCarron, draft a quarterback in the first round: Either that or they trade for him.

Browns sign Keenum, draft a quarterback in the first round: They’ll roll the dice that he’s the future while also using a top-five pick on Rosen, Allen or Darnold.

Broncos sign Cousins: They still think they can win now with a solid veteran quarterback.

Cardinals sign Bradford, draft a quarterback in the first round: I get the feeling they end up with Bakey Mayfield.