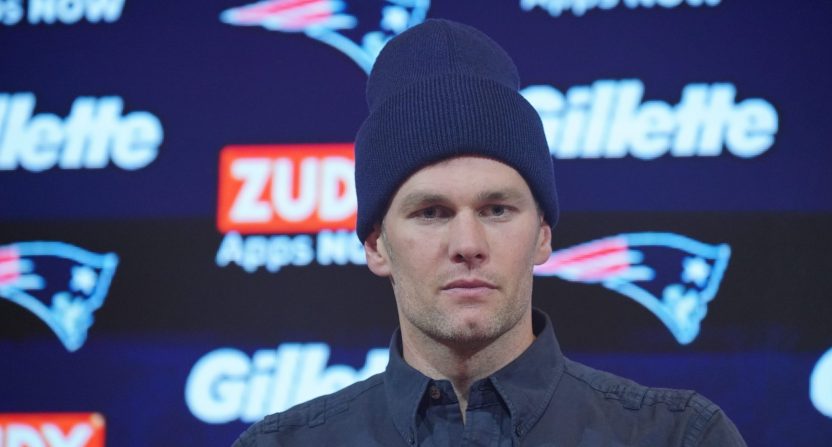 That cryptic tweet from Tom Brady Thursday night? ESPN’s Adam Schefter says it’s much ado about nothing. But it still looks as though the 42-year-old legend will hit the open market for the first time in his 20-year NFL career.

With that in mind and the 2019 season (essentially) out of the way, let’s speculate and forecast by looking at which teams should or shouldn’t pursue the most decorated quarterback in league history.

Arizona Cardinals: OUT — Kyler Murray is the future for this rebuilding team.

Atlanta Falcons: OUT — Matt Ryan has a lot more time left than Brady does. It wouldn’t be worth the switch.

Baltimore Ravens: OUT — Lamar Jackson is the MVP.

Buffalo Bills: IN — There’s still a lot of hope for Josh Allen, but he could take a year or two off if it meant Buffalo stealing Brady from its arch-nemesis.

Carolina Panthers: OUT — Might as well just stick with Cam Newton, who is a hell of a lot younger and, like Ryan, has won an MVP and gone to a Super Bowl.

Chicago Bears: IN — Forget Mitch Trubisky; this team has the talent to win right now with the right quarterback.

Cincinnati Bengals: OUT — They aren’t good enough to win right now with Brady anyway, so this wouldn’t make sense.

Cleveland Browns: IN — See the logic we applied with the Bills, but this time with Baker Mayfield. It would be fun to see the Browns boldly go for it, even if that could make things damn awkward with the 2018 No. 1 overall pick.

Dallas Cowboys: OUT — Dak Prescott is clearly the guy, now and long term.

Denver Broncos: OUT — They’re not on the cusp of a Super Bowl, and they have to stop chasing veteran quarterbacks. Stick with Drew Lock.

Houston Texans: OUT — Deshaun Watson is a rising star. No chance they make a change under center.

Indianapolis Colts: IN — Jacoby Brissett isn’t the answer, they have money to spend, and they have enough talent on offense and defense to compete for a Super Bowl in 2020. This would make a lot of sense if Brady were willing.

Jacksonville Jaguars: IN — It’s unlikely Tom would do this considering the state of that franchise, but Jacksonville is desperate for a guy like Brady. Nick Foles isn’t the answer. Brady could work as a bridge before they give Gardner Minshew II a shot in a year or two.

Kansas City Chiefs: OUT — Patrick Mahomes is the best player in football.

Las Vegas Raiders: OUT — While there’s a theory he could help generate hype for the Raiders in their new home, they’re still better off with Derek Carr. Moving on now would be too risky considering Brady’s age. Where would they be if he retired after one so-so season?

Los Angeles Chargers: OUT — Seriously, they’re better off with Philip Rivers, a first-round pick, or even a younger free-agent addition. I don’t buy that Brady would help put fans in seats at the Chargers’ new stadium. To do that, they have to win, and Brady might not have enough left for that.

Miami Dolphins: OUT — Rebuilding Miami is still a year or two away.

Minnesota Vikings: OUT — Kirk Cousins has as good a chance of suddenly leading the Vikings on a Super Bowl run as Brady does, and Cousins is extremely expensive.

New England Patriots: IN — The Pats don’t have any other options at quarterback. No reason they wouldn’t want him back for at least one more year.

New Orleans Saints: OUT — They’re better off bringing Drew Brees back after the highest-rated season of Brees’ career. Plus, they owe the 41-year-old a hell of a lot of money.

New York Giants: IN — Daniel Jones might be the future and they might not be on the verge of contending, but it would be too fantastically rich for the G-Men to take Brady from the Pats to finish his career.

New York Jets: OUT — As tempting as it would be for the Jets to steal Brady from the Goliath of their division, Sam Darnold has a good thing going.

Philadelphia Eagles: OUT — The highly-paid Carson Wentz is locked in.

Pittsburgh Steelers: IN — Better off with him than Ben Roethlisberger, who looks about 10 years older than Brady.

San Francisco 49ers: OUT — The Pats wish they could have Jimmy Garoppolo back.

Seattle Seahawks: OUT — Russell Wilson was an MVP candidate this season, and he’s the highest-paid player in the game.

Tampa Bay Buccaneers: IN — Bruce Arians would be happy to take him for a year or two over Jameis Winston.

Tennessee Titans: IN — Let’s not pretend Ryan Tannehill is the long-term answer. Mike Vrabel would love this for a year or two.

Washington Redskins: OUT — Brady probably wants nothing to do with that organization anyway, but they aren’t competitive and they wouldn’t be with Brady. Give Dwayne Haskins a full season in 2020.