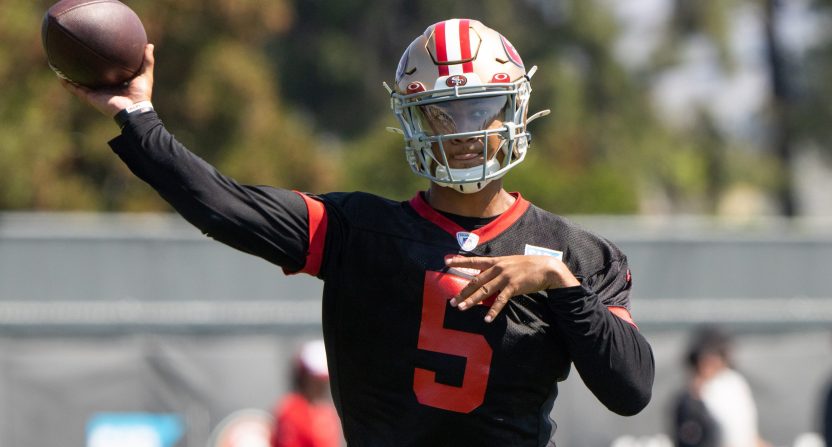 Good NFL players make a significant jump from their rookie season to their second (a.k.a. “sophomore”) season. Here are five who could become big stars in 2022:

Rashod Bateman must produce because the Ravens are thin at wide receiver. Due to the trade of Marquise Brown, Bateman is their leading returning wideout in terms of catches and yards. By default, that makes him WR1. Bateman’s development last year was hampered by a groin injury that caused him to miss the first five games. He started only four but showed flashes, including eight catches for 103 yards against Cleveland.

Brown was a big-play threat but also maddeningly inconsistent, dropping three potential touchdown catches against the Lions last year. In college at Minnesota, Bateman was also a home-run hitter, averaging 20.3 yards per catch as a sophomore. If he earns the trust of Lamar Jackson, Bateman will get more chances for splash plays due to Baltimore’s run-heavy offense. Plus, he has great hands (only two drops all season). The Ravens wouldn’t have traded away Brown if they didn’t feel Bateman was ready to handle the load.

Admittedly, we’re cheating a little here since Travis Etienne missed the entire season with a foot injury. Etienne was the second running back taken in the 2021 draft, one spot after the Pittsburgh Steelers chose Najee Harris. When you take a tailback in the first round these days, you expect them to start immediately. So, it stands to reason that Etienne’s workload would have mirrored Harris’ in terms of touches. Coming out of college, some argued that Etienne was a better overall prospect than Harris. Etienne is smaller but also possibly more explosive.

Etienne and Jaguars quarterback Trevor Lawrence, the top overall pick in 2021, were teammates at Clemson. In Jacksonville camp, Lawrence said that the tailback “looks like he’s in better shape than he was in our last year at Clemson.” Etienne can help take the pressure off Lawrence by being a dual threat. By playing him all over the field, he could make an impact similar to Alvin Kamara.

#Jaguars RB Travis Etienne with some speed out of the backfield
🏃‍♂️💨

Like many rookies, Kwity Paye got off to a slow start. He didn’t pick up his first sack until mid-November. There’s a lot of pressure on defensive ends to create pressure. A good pass-rush can short circuit great quarterbacks, especially if you don’t have to blitz. Paye finished last year strong, recording all of his sacks near the end of the season. He finished with 39 pressures, the second-most on the team. The Colts are hoping that success will carry over to this year.

Indianapolis has a new defensive coordinator in Gus Bradley because Matt Eberflus is now the Chicago Bears’ head coach. Bradley will try to get the most out of Paye to help a Colts defense that had only 33 sacks last year. The addition of veteran pass-rusher Yannick Ngakoue (10 sacks last year with the Las Vegas Raiders) should help Paye get more opportunities.

Patrick Surtain II has the pedigree to be great. His father was an All-Pro cornerback for the Miami Dolphins. It looks like the son might eventually be even better. In his first season, Surtain was a key part of a Denver defense that allowed the sixth-lowest passer rating against and the fifth-fewest touchdown passes (22). Being a cornerback can be a hard position to learn as a rookie. Surtain was immediately impactful, starting 15 games with 14 passes broken up. Quarterbacks had only a 69.7 passer rating against him, best among rookie cornerbacks.

The biggest concern could be the new coaching staff. Vic Fangio might have been a poor head coach, but he’s an excellent defensive mind. The new Denver defensive coordinator is Ejiro Evero, who was the Los Angeles Rams’ secondary coach. He worked with Jalen Ramsey, so you would expect him to get the best out of Surtain. Evero has already compared Surtain’s work ethic to Ramsey’s.

San Francisco is making the right decision to move on from the Jimmy Garoppolo Experience. Yes, he’s 4-2 in the postseason. In those six games, he’s thrown four touchdown passes to six interceptions. The Niners have been successful in the playoffs despite Jimmy G.

Trey Lance is the most talented quarterback Kyle Shanahan has had since 2016 NFL MVP Matt Ryan. Shanahan traded up to select Lance in the 2021 draft, and it’s time to see what the youngster can do.

There will be growing pains. Lance started only two games last year when Garoppolo was hurt. And Lance played only one game at North Dakota State in 2020 due to the pandemic-shortened season. But the raw skills are there (running and passing). Lance possesses gifts that Garoppolo simply doesn’t have.

Plus, Lance is walking into a great situation. He’s taking over a team that was a play away from the Super Bowl last year. Shanahan runs the most quarterback-friendly system in the NFL, and that should help make the transition smoother.