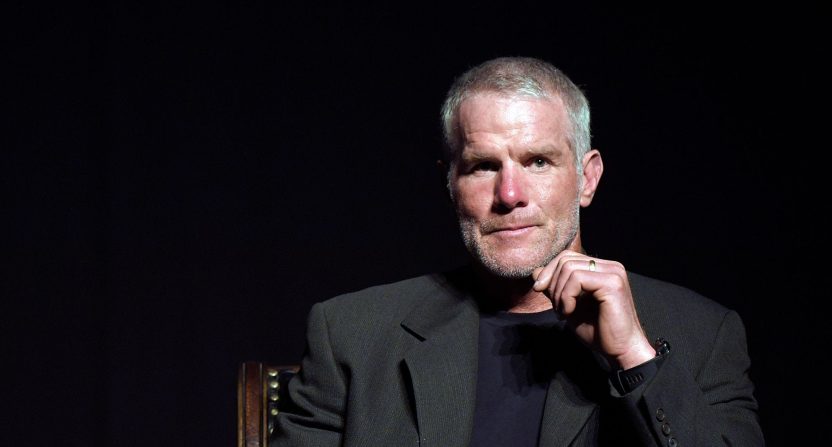 Earlier this month, news broke that Brett Favre was involved in what was coined “the largest embezzlement scheme in state history” when he spent millions in Mississippi welfare money to build a volleyball arena for his alma mater, Southern Miss. Apparently, he also tried to do the same thing again two years later, but this time for football practice facilities.

According to the Associated Press, Favre tried two years later to get additional cash from Mississippi’s welfare agency to build a brand new football practice facility for Southern Miss.

The AP reports that back in 2019, Favre texted Republican Phil Bryant – the state’s governor at the time – and wanted to use the welfare money to build an indoor practice facility for Southern Miss. Ultimately, that didn’t happen as Bryant told Favre that the money is “tightly controlled” and “improper use could result in violation of Federal Law.”

Favre briefly tried to proclaim his innocence, saying that he didn’t know where the money was coming from. But that was proven incorrect as Favre’s shady text messages suggest that the quarterback was deeply involved in the criminal conspiracy and very much aware of what was going on.

This whole situation just keeps looking worse and worse for Favre, and the NFL world had plenty to say about it.

Of course he did. https://t.co/OLuWG0fpyr

If you spend your NFL career throwing first half interceptions that necessitate 4th quarter comebacks, you too can be a dick pic sending grifter who half the state of Wisconsin still thinks is a hero. https://t.co/SIuVlu1kOV

I generally understand that there is no low that we aren’t willing to let rich white dudes go to, but sure seems there’s an unusual amount of “thanks for helping me do crimes” stuff fully on the record for this one

Time will tell whether or not Favre ends up in prison.