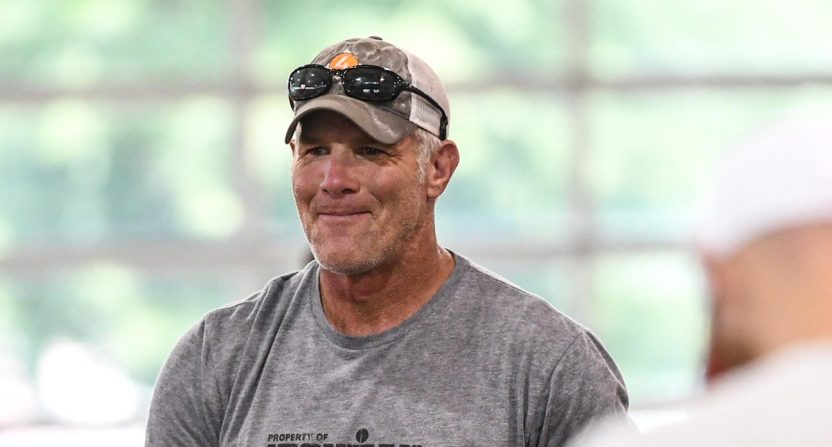 NFL legend and Mississippi native Brett Favre is engulfed in a national scandal involving his theft of millions of dollars from his state’s poorest residents to finance a new collegiate volleyball arena for his daughter.

On Tuesday, Favre‘s biographer, venerable sports reporter Jeff Pearlman, tweeted an extensive missive against Favre in which he said the quarterback was “a bad guy” who “doesn’t deserve the icon treatment.”

Pearlman’s thread culminated with him advising people not to buy Favre’s 2016 biography, Gunslinger, and burning the legendary quarterback’s iconic Green Bay Packers jersey in a trashcan.

Needless to say, that kicked off a round of reactions from people involved with the NFL:

This is pretty profound. Not sure how many people would do this. https://t.co/CXz9jCkGVC

A cautionary lesson here from Jeff: Hagiography is always a risk. Few superstars, particularly ones like Favre who had already shown us who he was, live up to the hymns that idolizing authors sing about them. https://t.co/ke6zq1Wsvp

You know how much of a trash human being you have to be for the guy who wrote your biography in 2016 to tell everyone to ignore it? https://t.co/GnPvm3MnND

For at least one Twitter user, the directive to not purchase Gunslinger arrived too late:

i just bought this fucking book on Monday lol https://t.co/INQDpVeJPH

While Pearlman received mostly accolades for burning the jersey and advising people not to purchase his work, some users questioned why Pearlman kept associating with Favre after the quarterback sent sexually charged images to a female reporter while a member of the New York Jets.

Still, despite the differing opinions, it’s clear that Favre’s image may be beyond repair despite being an NFL champion with 18 years in the league with four different franchises. Favre last played in the NFL for the Minnesota Vikings in 2010.