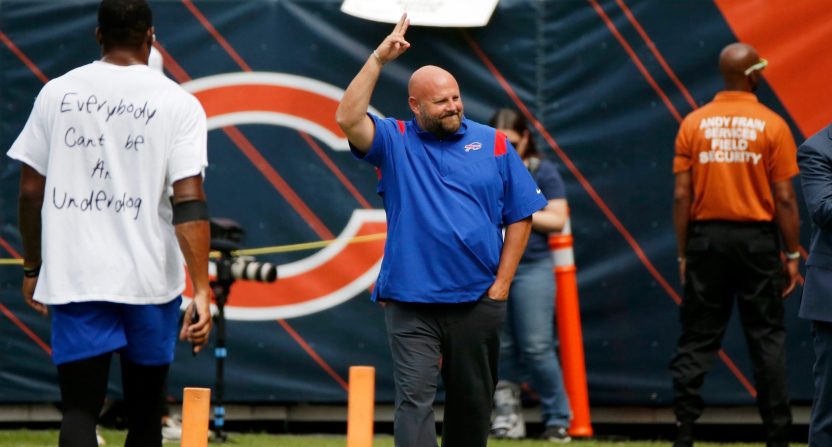 From the moment the New York Giants announced that former Buffalo Bills assistant general manager Joe Schoen was their new general manager, many people assumed that he would lead the effort to hire Bills’ offensive coordinator Brian Daboll away to become their new head coach.

Sure enough, it appears as though the Giants have their guy.

Sources: The #Giants are working to hire #Bills OC Brian Daboll as their new head coach. The two sides will attempt to do a deal and reunite him with old friend and new NYG GM Joe Schoen.

Daboll’s first interview with the Giants was actually the same day that Schoen was officially hired and his second interview came earlier this week following the Bills’ loss to the Kansas City Chiefs in the playoffs.

The 46-year-old was voted the AP’s NFL Assistant Coach of the Year in 2020 and has overseen a Bills offense that finished third in the NFL with 28.4 points a game and fifth with 381.9 yards a game. He was also part of the five Super Bowl-winning teams with the New England Patriots as an assistant. He also spent time as offensive coordinator for the Cleveland Browns, Miami Dolphins, and Chiefs.

While the official announcement may not come for a little bit, the reactions from around the NFL about the news have started trickling in.

Good for Brian Daboll. Finally gets his head coaching shot. Now the task will be for the Bills to replace him. Does Ken Dorsey join him in New York? Or does he stay as Buffalo‘s OC? https://t.co/c0OHZ86j1Z

Giants have their man https://t.co/xh6g5sAaqa

The New York Giants — after a string of terrible decisions — seem to be on the right track. https://t.co/IZOJwuEF4H

Daboll now gets to see if he can work the same magic with Daniel Jones that he’s done with Josh Allen.

It’s tough news for the Miami Dolphins, who had Daboll tagged as a finalist for their open head coaching position. They’ll likely look to Mike McDaniel and Kellen Moore for that job now.

Brian Daboll was a finalist for the #Dolphins, who now have two coming in next week — Mike McDaniel and Kellen Moore. https://t.co/z2bh5HHC82

UPDATE: The Giants have confirmed the hire.