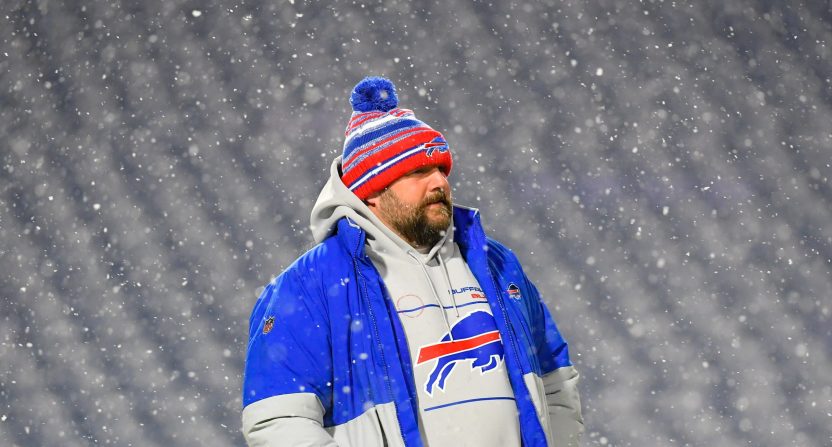 On Friday, the New York Giants introduced their new general manager Joe Schoen. The former assistant GM of the Buffalo Bills is now tasked with finding a new head coach to replace Joe Judge and it appears that he’s already zeroed in on the most likely candidate: Buffalo Bills offensive coordinator Brian Daboll.

All signs pointed to Daboll as being the person Schoen might be “packaged with” if he took the Giants’ job as they’ve both found great success as part of the Bills over the past four seasons. Daboll had to take time away from prepping for the Bills’ big playoff game against the Kansas City Chiefs this weekend as they hope to return to the AFC Championship Game for the second-straight year.

Daboll was voted the AP’s NFL Assistant Coach of the Year in 2020, has overseen a Bills offense that finished third in the NFL with 28.4 points a game and fifth with 381.9 yards a game, and was part of the five Super Bowl-winning teams with the New England Patriots as an assistant. He also spent time as offensive coordinator for the Cleveland Browns, Miami Dolphins, and Chiefs.

While it was expected that the Giants would speak with Daboll eventually, the speed at which they went from announcing Schoen to interviewing Daboll certainly caught the attention of a lot of NFL folks on Twitter.

My man walked down the hallway https://t.co/xnc2NBYVcj

It’s entirely possible the Giants will hire someone else as their head coach, but the smart money is on Daboll taking over Big Blue as soon as the Bills’ season is officially over.