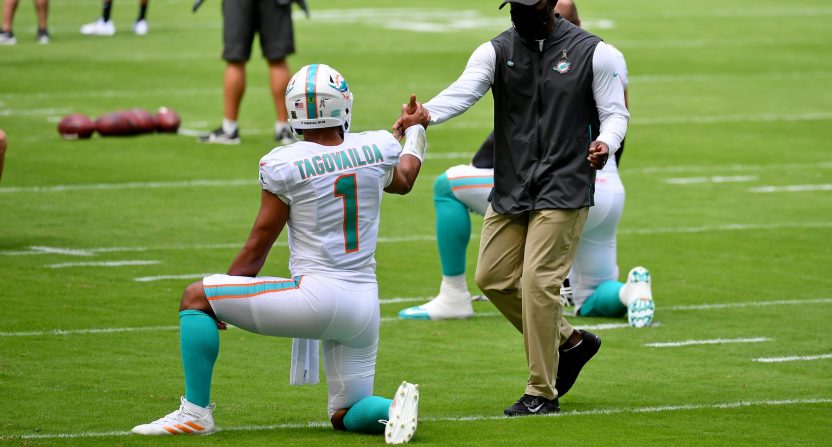 Former Miami Dolphins head coach Brian Flores dropped a bombshell on the NFL on Tuesday. Any lawsuit filed against the NFL is going to generate a lot of attention. This one is taking it to a new level.

This lawsuit has layers. New England Patriots coach Bill Belichick sent Flores a congratulatory text for landing the New York Giants job  — before he’d ever interviewed. It was later revealed that he meant to text Brian Daboll, who actually was hired.

Flores took aim at Dolphins. While their desire to tank in 2019 wasn’t exactly a secret, he’s claiming that Miami owner Stephen Ross offered him bonus money for every loss.

Between that, and the fact that Flores is also claiming that John Elway was late, disheveled, and probably hungover when Flores interviewed with the Denver Broncos in 2019, and yeah, this isn’t like unpacking a suitcase. This is unpacking a whole house.

Naturally, this has drawn a lot of strong reactions from the NFL world.

Brian Flores after he got those texts from Belichick pic.twitter.com/TQ96BCNvEX

Flores chose VIOLENCE on the start of Black History Month ✊🏿😂

There are other questions being raised, as well. One big one, what will the NFL do in an attempt to try to quell some of the public relations hits that are coming?

The Brian Flores lawsuit is the thing the NFL thought it would never face. It’s the thing that will force the league to change its ways when it comes to hiring practices.

Finally, what does this mean for Flores? Will Flores ever coach again? He had a 24-25 record and while that doesn’t seem great, it’s not bad when we remember that his first season in Miami was a tank year. To add more context, Flores is alleging that he was offered bonus money to lose games.

Given that situation, you’d think he’d be a natural hire and indeed, he’s on the interview schedule for the New Orleans Saints.

But will filing this lawsuit result in him being effectively blacklisted?

Brian Flores effectively had to end his chances at coaching in the NFL to point out what we already know about discrimination in the hiring process for Head Coaches in the NFL.