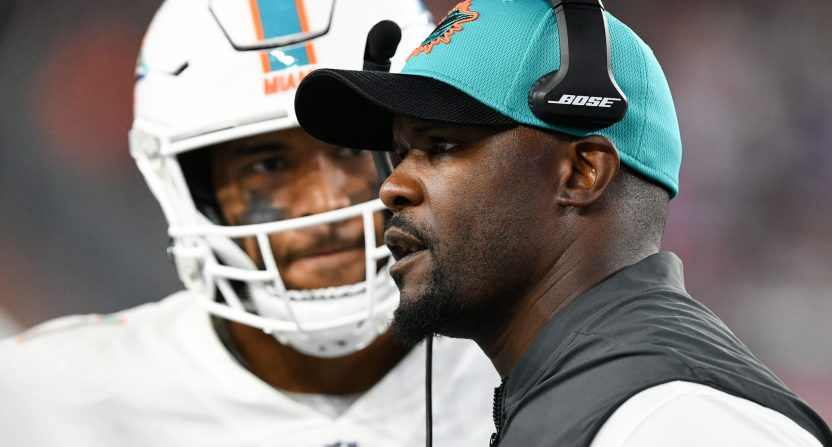 In 2019, the Miami Dolphins were coming off back-to-back losing seasons and had just hired Brian Flores as their new head coach. Not much was expected of the franchise that season and when the team came out of the gate losing their first seven games, they appeared to be on the road to the top pick in the NFL Draft.

Thus was born the “Tank for Tua” campaign, in which many speculated that the Dolphins were tanking the season on purpose in order to ensure they could draft Alabama’s Tua Tagovailoa. Some Dolphins fans even got in on the action by changing their Twitter handles to reflect the campaign. Naturally, the Dolphins denied the accusation, which would have been seen as sacrilege.

However, when the team played the Pittsburgh Steelers in Week 8, the Dolphins’ playcalling was so egregious that many pointed out the only way it made sense would be if you were actively trying to lose the game, though it was perhaps not as egregious as some made it out to be.

Yeah, this is either the worst call Brian Flores has ever made, or his best (tank). Inexcusable zero blitz in that situation. pic.twitter.com/yDONhynqUo

That is a team that's trying to lose. All-out blitz on 3rd-and-20 in that situation is not even trying to hide it tanking.

However, Miami started winning games, finishing the season 5-11 and earning the No. 5 pick in the draft, which they used to get Tagovailoa anyway.

All of which is to say, on Tuesday, Flores filed a lawsuit against the NFL and within that lawsuit claimed that Dolphins’ owner Stephen Ross had offered to pay him $100,000 for every loss on the season.

“Mr. Ross wanted Mr. Flores to “tank” the season to put the team in position to secure the first pick in the draft. Indeed, during the 2019 season, Mr. Ross told Mr. Flores that he would pay him $100,000 for each game lost that year. Then, when the Dolphins started winning games, due in no small part to Mr. Flores’ coaching, Mr. Flores was told by the team’s General Manager, Chris Grier, that “Steve” was “mad” that Mr. Flores’ success in winning games that year was “compromising [the team’s] draft position.”

The whole thing raises a lot of questions. Was Flores buying into this plan early on in the season but changed his mind later on? Did Flores never buy into the scheme? Did Ross pay Flores the $1.1 million due for those 11 losses?

We may or may not ever know those answers. But while we wait to find out more, plenty of NFL fans find themselves thinking back to that fateful season and how things played out.

So "Tank For Tua" was actually real… https://t.co/I2bNTXxYol

That was the "Tank for Tua" season which resulted ultimately in the Dolphins getting Tua with the 5th overall pick.

Still, a decent question to ask the NFL Competition Committee is "Is this tampering by the owner on the integrity of the NFL?" https://t.co/v4RADBzW1B

Flores is wild for leaking that

If what I just read is correct, Stephen Ross offered Brian Flores 100k per loss during “Tank for Tua” SZN.

The owner from the “Major League” looks better by comparison right now.

We can’t wait to hear what the Dolphins, Ross, and the NFL all have to say on the matter.