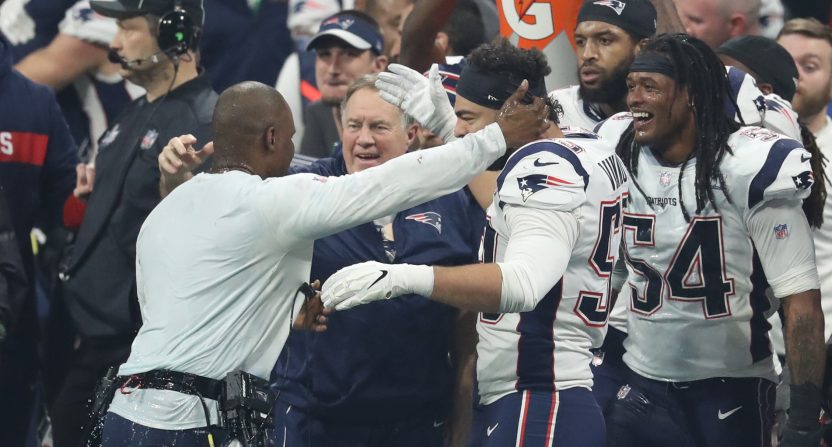 Brian Flores shook the NFL world up when he filed a class-action lawsuit against the league over racial discrimination in their hiring practices. The former Miami Dolphins head coach did so after finding out from former boss Bill Belichick that the New York Giants had reportedly already decided to hire Brian Daboll before he’d officially interviewed with the team.

Flores used direct messages from Belichick as evidence that NFL franchises like the Giants were doing sham interviews with Black candidates in order to satisfy the Rooney Rule without the intention of actually hiring them.

While Flores wasn’t hired as a head coach in the most recent hiring cycle, he was recently hired by the Pittsburgh Steelers as part of Mike Tomlin’s coaching staff. That means he’ll be back in the league that he’s currently suing and coaching against some of the teams and coaches named in his lawsuit.

As far as why he fronted the Belichick messages in his lawsuit, Flores recently explained why on an appearance on I AM ATHLETE on YouTube. Flores said that he’s “not mad” at Belichick about the messages, but they provided him with the purported proof that he needed.

“To me, I thought it was specific to the lawsuit in that it confirmed a lot of the things that I thought were going on — that I think a lot of Black or minority coaches think are going on as far,” Flores said. “It kind of confirmed it for me as having a fair and equal opportunity to go and have an interview and show your acumen, show intelligence, show your ability to lead, show your willingness and your leadership. Oftentimes, it’s not a fair and equal playing field.”

As far as how he feels about Belichick, whom he worked for as part of the Patriots coaching staff, Flores has nothing but respect for him.

“I think the one thing people don’t know about Bill is that he listens,” said Flores. “He listens, so if you have — and, again, you’ve gotta earn the right for him to listen — but if you have an idea, a thought, a person (or) there’s a matchup we can win, a part in the game, he’ll listen. He may add something to it. He may through it out. But he listens. I think that’s one of his greatest strengths. I try to take from him when I was in Miami.”

[I AM ATHLETE, Yahoo! Sports]