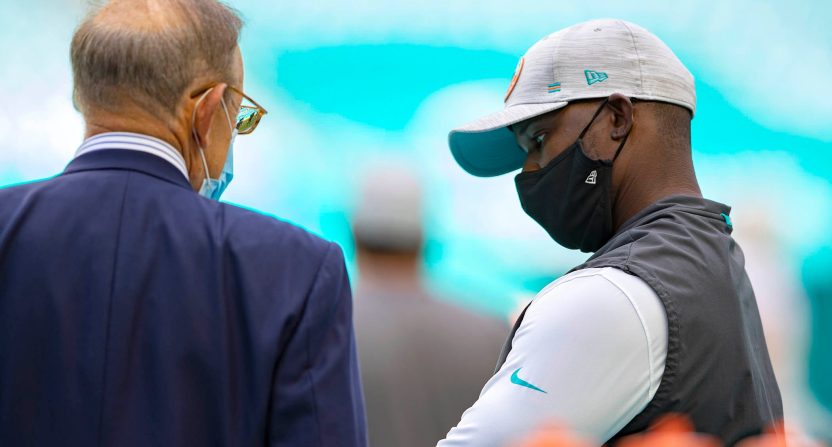 Former Miami Dolphins head coach Brian Flores, who is currently interviewing for multiple open head coaching positions, has filed a class-action lawsuit against the New York Giants and the rest of the NFL accusing them of racial discrimination.

The damning lawsuit alleges that Flores’ interview with the Giants was a “sham” and he knew this because New England Patriots head coach Bill Belichick accidentally texted him congratulating Flores on getting the job, thinking he was Brian Daboll. According to Belichick, the Giants had already made up their mind before Flores came in for his interview.

Former #Dolphins HC Brian Flores is suing the NFL and the Giants alleging racism in their hiring process. Flores has texts from Bill Belichick congratulating him for getting the job — but Flores had yet to interview. The text was meant for Brian Daboll. https://t.co/gmPUw9gHIq pic.twitter.com/tyTztTf3br

While there are many damning allegations in the lawsuit, the one that it claims about Dolphins’ owner Stephen Ross might be the most egregious. According to Flores’ lawsuit, Ross offered him $100,000 per game in 2019 if he would lose on purpose, which the head coach refused.

“Mr. Ross wanted Mr. Flores to “tank” the season to put the team in position to secure the first pick in the draft. Indeed, during the 2019 season, Mr. Ross told Mr. Flores that he would pay him $100,000 for each game lost that year. Then, when the Dolphins started winning games, due in no small part to Mr. Flores’ coaching, Mr. Flores was told by the team’s General Manager, Chris Grier, that “Steve” was “mad” that Mr. Flores’ success in winning games that year was “compromising [the team’s] draft position.”

The lawsuit also alleges that Ross tried to make Flores recruit “a prominent quarterback” to join the Dolphins, even setting them up to meet unsuspectingly, which Flores also claims to have refused.

Flores was fired by the Dolphins in January despite leading the team to back-to-back winning seasons for the first time since 2003. It was seen as a shock by many as the team was on an upward trajectory in spite of struggles with the quarterback position. Even then, many noted that Flores was the latest example of black head coaches who seem to get less leeway than others.

Black coaches often talk privately about how the leash is much shorter for them than their white counterparts.
Flores is a perfect example of this.

Ross and the Dolphins have yet to respond but we have to imagine this is just the beginning of some potential fallout, especially given how much of a spotlight is on the NFL heading into Super Bowl time.