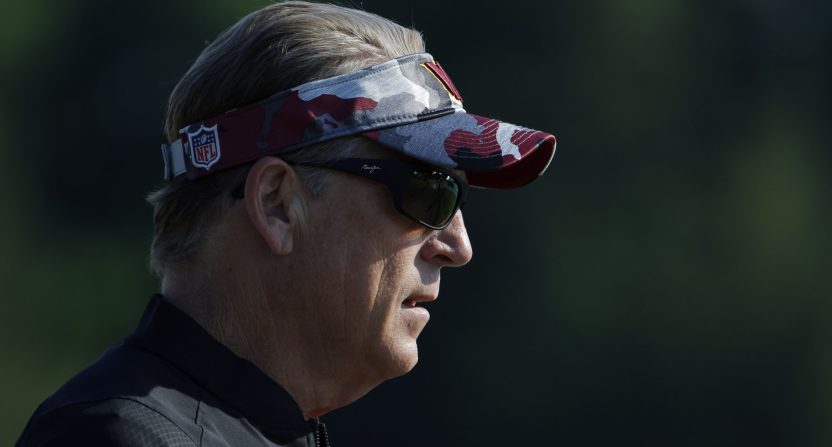 On Wednesday, Washington Commanders’ defensive coordinator Jack Del Rio put fuel on the fire of his previous comments comparing the January 6 insurrection to the George Floyd/social justice protests of 2020. Plenty of people responded with thoughts of their own, including former NFL star Brian Mitchell.

Del Rio made headlines on Tuesday when he responded to a tweet about the upcoming January 6 committee public hearing by saying he’d love to hear “the whole story “ about “why the summer of riots, looting, burning and the destruction of personal property is never discussed,” referring to the overwhelmingly peaceful social justice protests from 2020 (which have, in fact, been much discussed).

He doubled down on those comments Wednesday, referring to the violent Capitol insurrection, which directly led to the death of seven people, as a “dustup.”

Former NFL star Doug Baldwin reacted to those comments by tweeting “Jack Del Rio is an ignorant, ignorant man. And that is as loving and respectful as I can put it.”

Brian Mitchell, who spent 10 seasons with the Washington franchise that now employs Del Rio, talked about the situation on his show on 106.7 The Fan. Mitchell called out not just Del Rio but head coach Ron Rivera, who he says allows his DC to go out and say whatever he wants without any recourse.

Brian Mitchell, talking on 106.7 The Fan earlier today went on a rant about Jack Del Rio, his tweets, and Ron Rivera's unwillingness to discuss them. It's long, but worth reading. Here goes: pic.twitter.com/P6LSGHBIU0

“When you have Jack Del Rio, who constantly feels ‘I can just go out and say whatever the hell I want to say’ – why? Because the coach never says anything to him? “You got all these issues going on with the Washington Commanders right now, and [Del Rio’s] constantly trying to make waves because of stupidity. And you wonder why that team wasn’t disciplined last year, because your damn leader that’s leading your defense is not disciplined.”

Mitchell went into deep detail about why he feels Del Rio is in the wrong about the protests and how his comments hurt the Commanders.

Mitchell’s comments garnered a pretty strong reaction of their own.

This was…something very necessary that needed to be said. https://t.co/paomX6DtEV

Wow. Quite a thread here. You can’t tell me that Washington players aren’t talking about this in the locker room. I refuse to believe that. https://t.co/Rq7oFvuGMk

Woo this thread. Can be hard to address tough issues because it's rarely rewarded, sports culture rightfully keeps things in-house. But when people feel unheard, stuff gets out, even at professional risk.

Discipline, doing your specific job, being a pro is modeled at the top. https://t.co/F9IuWpmT7d