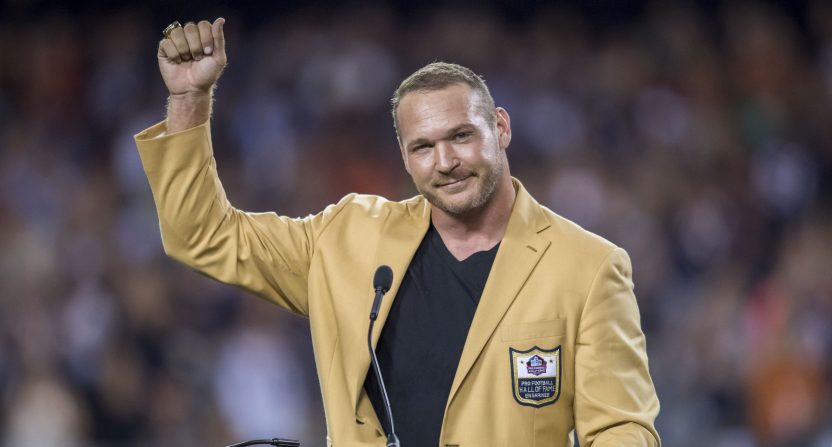 The NFL has had a dark history of downplaying the risks of head trauma. In recent years, there has been some progress when it comes to compensating former players who display signs of chronic traumatic encephalopathy (CTE), which is caused by repetitive blows to the head.

A settlement was reached in 2013 which allowed those amongst the 18,000 retired NFL players who were affected with compensation totaling $765 million. This was seen at the time as a step in the right direction for NFL player safety, but it appears that not everyone believes all these players should have been eligible for compensation.

Former Chicago Bears linebacker and 2018 Pro Football Hall of Fame inductee Brian Urlacher discussed the topic of CTE while on the Bussin’ with the Boys podcast recently and said that he believes that some retired players are faking their symptoms of potential CTE to get a chunk of the settlement money.

“Here’s the problem now with all the guys with the CTE,” Urlacher said, via Mediate.com, “if they do have it, I feel for them, but there’s guys who say they have it just so they can be in the fu***** lawsuit.”

There is a lot to break down regarding Urlacher’s claims, but first and foremost these comments are extremely disrespectful to those who have been diagnosed with CTE post-mortem, which is the only way to reveal whether or not someone truly has CTE.

It also downplays the struggles that players do go through that are suffering from symptoms of CTE, which the family of former wide receiver Demaryius Thomas talked about extensively last week following his unfortunate death last December.

Someone like Urlacher, who played 12 years in the NFL at a contact-heavy position like a linebacker, should know about the very real effects of brain trauma from playing football for a sustained period of time. For him to make these claims is flat-out ignorant and dangerous to those who do have serious long-term health effects from their NFL career.