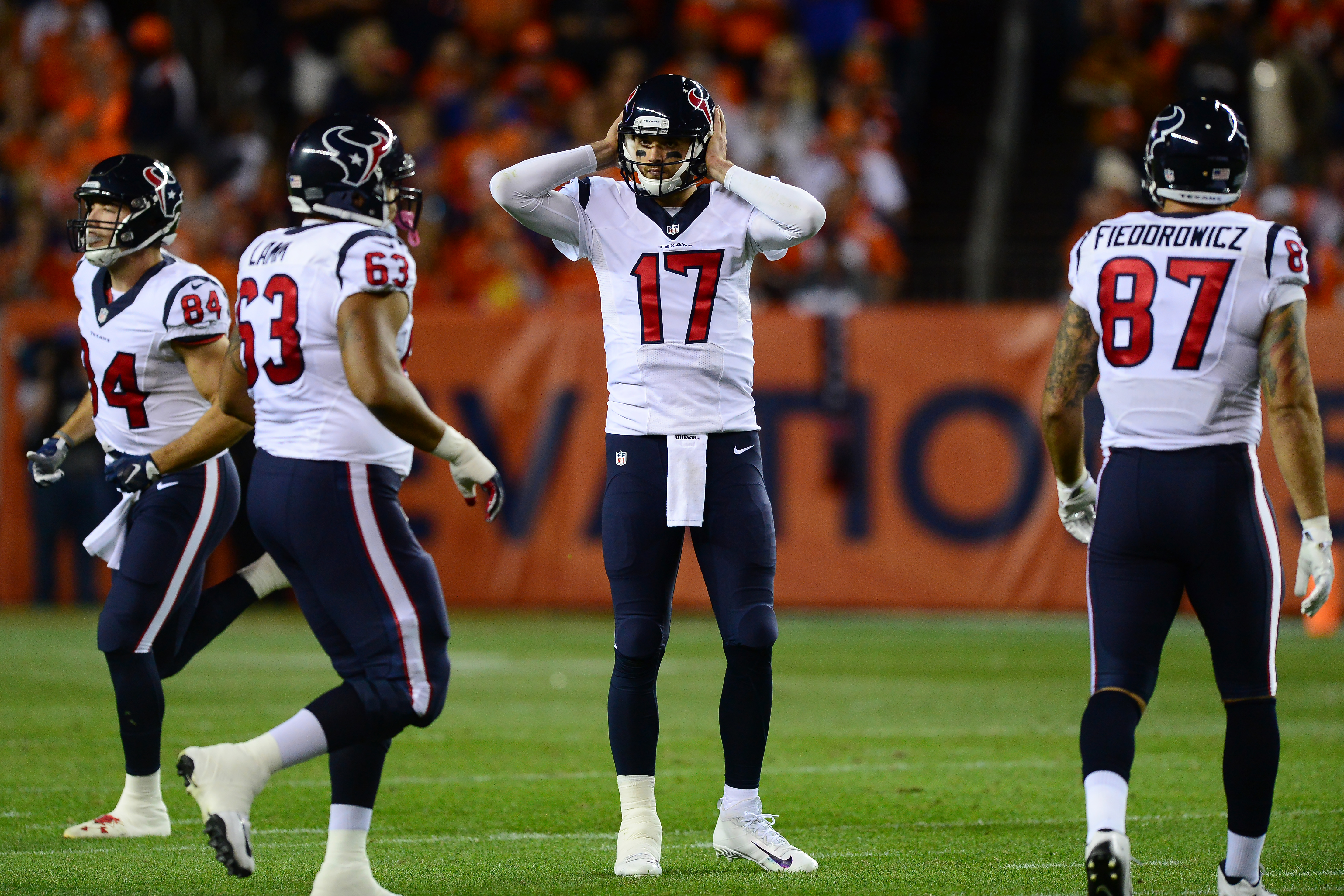 It’s safe to say that the Brock Osweiler era for the Houston Texans has gotten off to a rocky start.

Though the Texans are the AFC South’s current leaders at 4-3, that says more about the struggling division, in which they are 2-0, then any masterful play out of their top offseason acquisition.

Osweiler was added in free agency after his previous team, the Denver Broncos, refused to give him the contract he was seeking. It made sense; Osweiler had just seven career starts for Denver, all coming in relief of Peyton Manning in 2015 when the Broncos were also aided by a league-leading defense and strong rushing attack. Still, the Osweiler-led Broncos were 5-2, the Texans cycled through six quarterbacks in 2015, and Houston head coach Bill O’Brien believed that Osweiler would be not just the immediate starter for the Texans but a long-term fixture at quarterback.

So far this year, Osweiler has completed just 58.2 percent of his passes and has thrown eight touchdowns to eight interceptions. His yards per attempt are just 5.7, a number that Pro Football Reference points out is 30 percent below the NFL average thus far this season, putting him in some very auspicious historic company.

Brock Osweiler is the 16th QB since 2000 to have a Y/A that’s 30% below league average. The rest of that group isn’t too promising pic.twitter.com/Pfr7K6R4cw

He ranks last in Football Outsider’s DYAR metric and has a league-worst grade for quarterbacks from Pro Football Focus. The two players who have a lower quarterback rating than him—Ryan Fitzpatrick and Blaine Gabbert—have both been benched already this season (though Fitzpatrick is back thanks to a season-ending injury suffered by Geno Smith).

Benching could also be ahead for Osweiler, but that won’t solve the larger problem, which is not that Houston signed him in the first place, but rather the contract they gave him in the spring. The deal—four years, $72 million in maximum value—seemed inflated at the time and now seems ridiculous, even with the knowledge that no deal in the NFL is ever what it first appears and that very, very few players see all the money the contract is alleged to provide. Mainly this is because the Texans will be stuck with Osweiler in one capacity or another until 2018.

To put this in perspective, Osweiler’s cap hit next year ranks 13th among quarterbacks, but is just around $5 million lower than Tony Romo’s league-leading $24.7 million hit and is equivalent to those of Andrew Luck, Eli Manning, Drew Brees and Russell Wilson. His base salary, meanwhile, ranks third among quarterbacks, just ahead of Matt Ryan and just behind Matthew Stafford. For a quarterback who had just seven starts before this year, that is astounding. Now, based on his performance so far this season, it’s maddening.

The desire to have a quarterback a team can trust for the long-term is a strong one, and a reason why players like Osweiler get contracts they don’t seem to have yet earned. What the Texans went through last year at quarterback would make any team do crazy things.

It should be noted that there were high points for Osweiler during his starting stint for Denver in 2015 so a rebound in 2016 is not out of the question. But if his season continues on its current path, the contract given him by the Texans will be viewed as one of the most questionable, if not simply one of the worst, in recent memory. Joe Flacco’s restructure-friendly deal with the Baltimore Ravens and the pay-as-you-go (and now about to be player-voided, thanks to a recent rework) contract the San Francisco 49ers gave Colin Kaepernick aren’t even apt comparisons.

Houston’s options are few. The Texans, should they see fit to bench Osweiler in favor of Tom Savage or someone else, (something O’Brien is not currently considering) could try to restructure his contract to reduce his immediate cap hit. This would allow them to swallow the slice of humble pie that would be served up by his demotion, though it would also keep him on the roster longer. A restructure, though, could also make Osweiler a more enticing trade target for a team needing a relatively experienced backup quarterback.

What is clear is that the Texans will not be able to trade Osweiler at his current 2017 price tag unless he starts playing better immediately. They could also just keep him as their starter and hope for the best. Otherwise, his 2017 season could be spent as a very expensive benchwarmer, an embarrassment the Texans are hoping to avoid.

Right now, the Texans’ gamble with Osweiler appears to be an expensive one not paying off. While their alternatives were not great in the offseason, they should have been able to negotiate something more reflective of Osweiler’s talent and experience level, acting realistically instead of idealistically. At the very least, the Texans could have structured it in such a way that if 2016 doesn’t work out, they aren’t backed into a corner in 2017.

Clearly, John Elway and the Broncos knew what Osweiler was worth, which wasn’t as much as Osweiler thought he was worth. O’Brien and the Texans either didn’t get that memo or chose to ignore it. Now all the buyer’s remorse in the world can’t free them from their 2017 commitment to the quarterback.