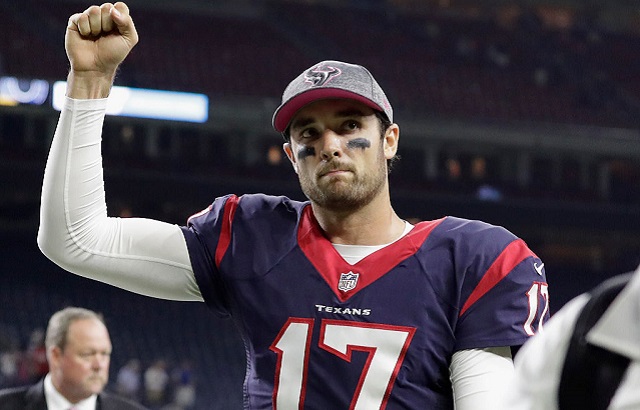 It’s playoff time for fantasy football, but that doesn’t mean you should stop the search for sleepers in trying to gain an edge over your opponent, or stash a decent player during your first-round bye as you make a run for glory in your league.

With bye weeks now in the rearview mirror, there are plenty of options to choose from in the deepest talent pool since Week 4 for owners to scour for a potential impact contributor when it matters most. This week’s column once again looks at five players still available in many leagues that owners need to consider for their playoff matchups this Sunday.

If you have a tough Week 14 matchup with your usual starting quarterback, there are luckily a few options on the waiver wire who could present better upside than some of the household names. Brock Osweiler is one of those quarterbacks who can be had off the wire with the right set of circumstances to see a considerable uptick in production.

Osweiler’s first season with the Texans has yet to have a true offensive explosion from the former Broncos passer, but the Indianapolis Colts did concede 269 yards along with two touchdowns in their first meeting in Week 6. With 202 yards and two touchdowns in winter conditions during a loss on the road to the Packers last week, there is a lot to like with Osweiler in a rematch against a suspect Colts secondary, playing in a dome. If you prefer to avoid tough matchups and weather concerns in the fantasy playoffs, Osweiler is a safe waiver wire option that should be the best available name this week.

“This is a guy we should be talking about more. He’s clutch.” @HeyKayAdams talks @Broncos QB @TrevorSiemian #GMFB https://t.co/PGv5WicwMk

If you can’t land Osweiler for some reason and still need a quarterback off the wire, his replacement in Denver is the next best sleeper option. Siemian’s similarly favorable matchup against the Tennessee Titans secondary will provide a second quarterback for owners to ponder if they feel the need to make the switch before Sunday’s play begins.

Siemian sat out last week against the Jacksonville Jaguars with an injury after his career-best 368 yards and three touchdowns on against the stingy Kansas City Chiefs secondary. If he returns as expected to take on the Titans on the road, it is very tempting to gamble on Siemian replicating his performance from Week 12 before he was injured.

Due to Siemian’s questionable status, it is best to wait until Sunday before you pull the trigger. However, if healthy enough to start, he should have another successful outing to continue his streak of four straight starts with at least 250 passing yards. Siemian also has thrown seven touchdowns during that span, which should make owners feel safer in taking a chance on a passer who had a shaky start to his first season under center with the Broncos.

Seattle Seahawks wideouts are an up-and-down group when it comes to reliability in fantasy, but still provide some value in the right matchups thanks to Russell Wilson’s continued improvement into an elite quarterback. Seahawks receivers especially have value against defenses that are weak against the pass and have to account for the run, which is the case this week with the Green Bay Packers.

The Packers are one of the NFL’s worst teams when it comes to pass defense, and it has played a significant role in their decline from a contender in the NFC to a team that will need a December hot streak just to sneak into the second Wild Card spot. Green Bay appears to be incapable of shutdown coverage, and that shouldn’t change against the Seahawks after Brock Osweiler threw for two touchdowns at Lambeau Field last week.

Tyler Lockett is the wideout most likely to burn the Packers, thanks to his speed and ability to make a play out of nothing. After a 75-yard touchdown run last week, the Seahawks most likely will plan to continue using Lockett in the role once reserved for Percy Harvin. The Packers have little answers for game-breaking speed on defense and could be yet another addition to Lockett’s expanding highlight reel.

Will Fuller made this list last week and had himself a solid game by all accounts with five catches for 59 yards. Unfortunately, those who made the leap of faith to start the rookie receiver didn’t get the reward of a touchdown for their troubles. The lack of a touchdown prevented Fuller from a double-digit fantasy performance, but it also keeps him around for another week of value in the aforementioned favorable matchup against the Indianapolis Colts secondary.

Fuller was injured for the Texans’ first game against the Colts this season, but will have his opportunity to make his impact in a game that is crucial to the playoff hopes of both teams. With six targets in each of his last two games, the return of a healthy Fuller is bound to pay off with a big game for the rookie eventually. In leagues that require Flex spots or in case of an injury emergency on Sunday, Fuller is a good safety net who seems bound to have a monster afternoon before the fantasy season is over. After a strong game in the snow in Green Bay, it won’t hurt to stick with Fuller in the dome against the Colts for one more week as a rookie sleeper who could break out in the same fashion he did at the start of the season.

At this point of the fantasy football season, all of the workhorse and feature backs are already taken, leaving little help on the waiver wire. That leaves backups who could break out as the only options for those who need to find a rusher to insert in their lineups.

Of the secondary backs who could have a big game this Sunday, Tevin Coleman sticks out as the best bet after his 12 carries against the Kansas City Chiefs last week for the Falcons in his second game back from a hamstring issue. The Los Angeles Rams rank outside of the Top 20 in run defense this year, which bodes well for the yardage to increase along with the carries, as the Falcons work Coleman into the tandem role he had with Devontea Freeman before his injury. Goal-line carries are a concern, but if Coleman can continue with the double-digit carries, he could be provide some valuable points in RB2 or Flex spots this week.