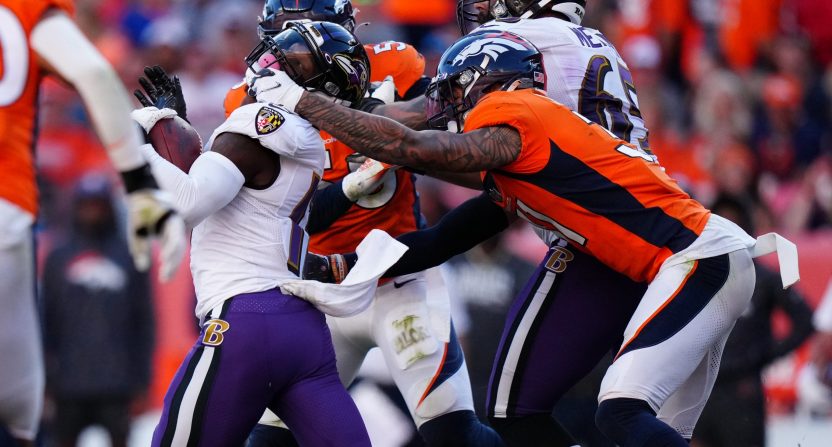 On the final play of the game between the Denver Broncos and Baltimore Ravens on Sunday, the outcome had already been decided with the Ravens leading 23-7 and only three seconds remaining. Under normal circumstances, the Ravens, who had the ball, probably would have knelt to let the clock run out so the game could end. However, the Ravens were in the midst of a 42-game streak of rushing for at least 100 yards and currently found themselves at 97 on the day. That led head coach John Harbaugh to call on quarterback Lamar Jackson to run the ball and try to keep the streak alive instead.

The move infuriated the Broncos’ coaching staff and players, who felt like the play was unnecessary and a slap in their face.

WATCH: The Broncos sideline was enraged as the Ravens decided to run the ball on the final play of the game rather than take a knee. #9sports #BroncosCountry pic.twitter.com/QshWgAbkpX

According to 9NEWS, both Broncos’ defensive line coach Bill Kollar and defensive lineman Shelby Harris voiced their displeasure with the Ravens as soon as they realized what was happening, citing a lack of sportsmanship. Even Jackson, who gained five yards on the play to keep the streak alive, was confused about the call.

“I don’t know what he was thinking,” Jackson said. “I thought we would take a knee and he said, no, we’re going for it. The game was put away… I’m not going to lie. I ain’t really care about the record. I wasn’t thinking about that. I was thinking about winning the game.”

On Monday, Broncos head coach Vic Fangio did not mince words about how he felt, tearing into the Ravens and calling the move “bull***.”

Broncos HC Vic Fangio thought the Ravens’ run at the end of the game was “kind of bull****” and notes he’s never seen anything like that in his 37 years of coaching in the NFL. pic.twitter.com/TltszwLKmW

“I thought it was kind-of bull**** but I expected it from them. 37 years in pro ball, I’ve never seen anything like that,” said Fangio. “But it was to be expected and we expected it.”

When asked why he expected the Ravens to try to keep the streak alive rather than kneel, Fangio said “because I just know how they operate. That’s just their mode of operation there. Player safety is secondary.”

Meanwhile, Harbaugh defended the play, saying it was “meaningful” to him and that he wanted to do it for his players and coaches.

“It’s one of those things that’s meaningful,” Harbaugh said. “It’s a very, very tough record to accomplish. It’s a long-term record. So, I’m not going to say it’s more important than winning the game, for sure. It’s certainly not. But, as a head coach, I think you do that for your players and you do that for your coaches, and that’s something they’ll have for the rest of their lives.”

There are plenty of Ravens fans out there who appreciated the move and like the “don’t care” attitude of the Ravens. But the Broncos are certainly going to remember this. And while Fangio might be going a bit overboard saying he’s never seen anything like this in 37 years, he’s going to be extra motivated the next time these two teams play, possibly in the playoffs when what happens at the end of the game truly matters.