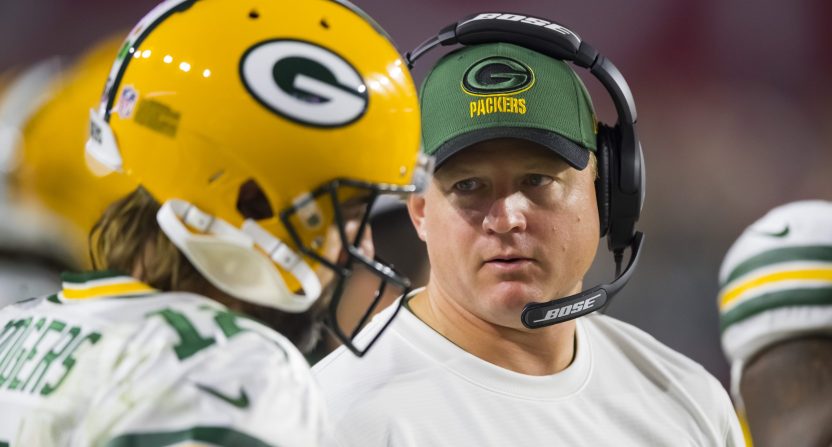 Before the NFL season when it seemed like Aaron Rodgers and the Green Bay Packers could be heading for a divorce, the Denver Broncos were considered the most likely trade destination.

Of course, cooler heads prevailed and it now sounds like Rodgers would very much prefer to stay in Green Bay beyond this season, though he certainly hasn’t closed the door on other possibilities.

The Broncos fired head coach Vic Fangio earlier this week and have started lining up candidates to replace him. While they certainly have a full list of potential head coaches to choose from, a couple of those interview choices have piqued the interest of those who think the Broncos are still trying to create a scenario where Rodgers considers coming to Colorado.

Specifically, the Broncos have requested interviews with Packers quarterbacks coach Luke Getsy and offensive coordinator Nathaniel Hackett. Hackett is a hot candidate this year, also seemingly getting interviews with the Bears and Jaguars. The Getsy request is more interesting as he’s not exactly a hot commodity as a head coach. The consideration of both of them is fueling speculation that perhaps they’d love to hire Hackett and Getsy in a scenario that would be very appealing to Rodgers to join them.

The #Broncos requested an interview with #Packers QB coach/pass game coordinator Luke Getsy for their head coaching job, per source.

It’s the first request for the 37-year-old Getsy, a valued member of Matt LaFleur's staff who many regard as a future head coach.

All of this might be looking into the situation way too much as the Broncos may also look at how successful the Packers’ offense has been the past few seasons and want to see if they can recreate that for themselves. A lot of people think Dan Quinn is the favorite to get the head coaching job and their interview with Getsy may be more about seeing if he would make a fit as OC instead.

I've got NFL people who think #Broncos are zeroing in on #Cowboys #DanQuinn as HC, with GM Paton interviewing guys like Luke Getsy of #Packers and Jerod Mayo of #Patriots to serve as Quinn's coordinators in Denver. MORE: https://t.co/cUBcRc1pYu pic.twitter.com/YNGMpUiiVk

Still, the connection between the coaches and Rodgers is not going unnoticed.

Broncos request an interview with another Packers offensive mind in Luke Getsy.

The 37-year old has been Aaron Rodgers QB coach since 2019 and has also been GBs passing game coordinator the past two seasons. https://t.co/cVos0G268T

Broncos should just ask Rodgers who he would like them to hire. 😉 https://t.co/sELpa1UanN

Big one for the Packers QB coach, who Aaron Rodgers and Davante Adams both love https://t.co/Vy4UB6PXL6

All signs point to Hackett likely getting a new job after this season. If Getsy leaves as well, even if Rodgers doesn’t follow either of them anywhere, it will be interesting to see how that impacts his decision to stay put with the Packers.