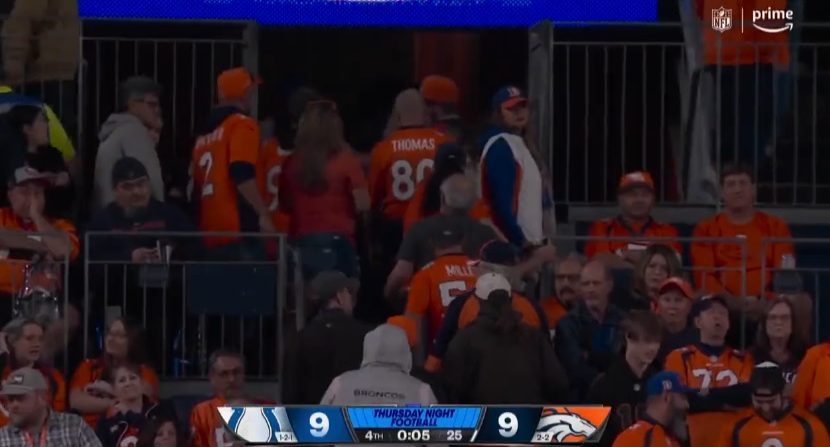 Thursday night’s game between the Indianapolis Colts and Denver Broncos was a chore to get through. And while the game was the exact opposite of a blowout, many of the fans who went to the game headed for the exits early.

The Broncos were driving to potentially put the game away but Russell Wilson‘s second interception of the day gave the Colts new life. They took advantage of that, driving down the field and tying the game on a 31-yard field goal by Chase McLaughlin just before time expired.

And even though the game was headed for overtime, dozens of fans at Denver’s Empower Field at Mile High headed for the exits.

The Colts tie this awful game 9-9… and Broncos fans head for the exits instead of staying for overtime. 🏈😂#TNF pic.twitter.com/h6KxxHs8qr

Fans leaving in the final seconds of NFL games is a fairly common sight. We don’t, however, usually see scores of fans leaving tied games. And while it is a weekday and many of those fans likely have to go to work on Friday, it’s important to remember that in Denver, it was only about 9:30 p.m. when this was going on.

While some were upset to see so many fans leaving a game before overtime, the overwhelming majority of the NFL world was sympathetic to those who chose to beat traffic.

Broncos fans are leaving with the game going to overtime????

My word this game has broken people

Fans leaving 😂😂😂😂😂 this is perfect

The fans are leaving during a tie game 😂😩

Lmao, it's a tie game and Broncos fans are leaving rather than sit through OT

#Broncos fans leaving a home game heading to overtime is one of the craziest things I’ve ever seen in an #NFL football game.

It’s hard to blame anyone for taking off early. While Thursday Night Football games are often, low-scoring affairs that border on boring, this was was at a new level. Fans in the stadium voiced their displeasure throughout the night, as did those watching at home and even the game’s broadcasters.