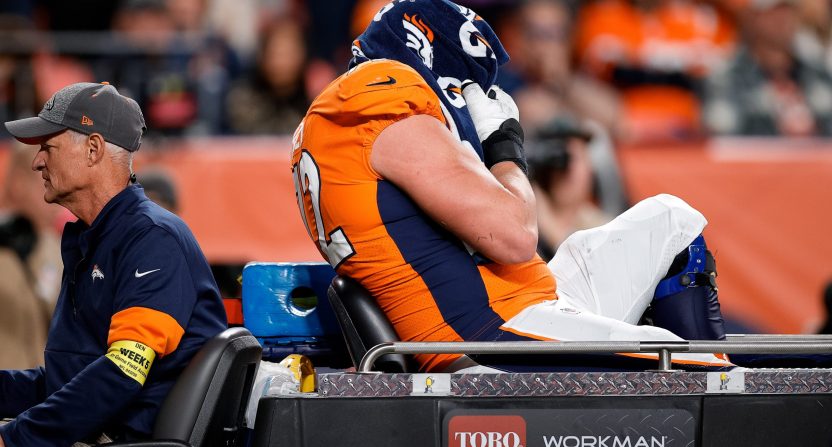 The Denver Broncos are receiving a ton of criticism after their loss on Thursday against the Indianapolis Colts. While the loss certainly hurts, perhaps even worse news emerged following the game about starting left tackle Garett Bolles.

Bolles suffered a gruesome-looking injury late in the fourth quarter when he got his leg rolled up on during a run play.

By video, he appeared to suffer a high ankle sprain

It instantly didn’t look good for Bolles, and he was ultimately carted off the field in a ton of pain.

According to Broncos beat reporter Mike Klis, Bolles suffered a broken right leg on the play, and further tests will reveal just how long he will be out for Denver.

Bolles has been extremely reliable at the left tackle position for the Broncos, only missing four games thus far in his six-year NFL career prior to this injury.

It is certainly an extremely unfortunate injury for Denver, and many have taken to social media to express how much the Broncos will miss him on the field for the foreseeable future.

I am not really okay.

To make matters worse for the Broncos, Nathaniel Hackett said the injury to Garett Bolles "didn't look good." His reaction said the same thing. Was on crutches after the game. Looks like a long-term injury for Denver's top offensive lineman.

Hate seeing this for Garett Bolles. He is visibly upset…slamming his hands down being carted off the field. Not good.

Indianapolis was able to get to Broncos quarterback Russell Wilson early and often in Thursday’s game, sacking him four times which caused some real struggles for Wilson.

Wilson has been sacked 16 times thus far this year, which ranks as the third most in the NFL.

Considering the severity of Bolles’ injury moving forward, it certainly doesn’t seem like that will change for the better anytime soon.