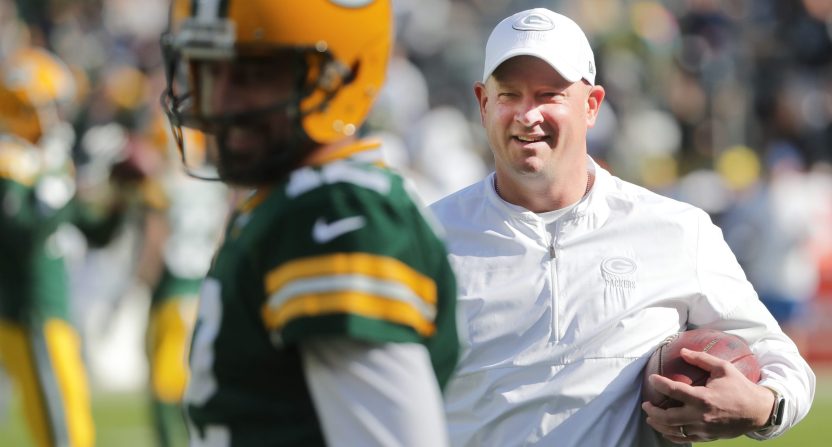 The Denver Broncos need a new head coach and it sounds like they’re getting very close to making their pick. According to some, they’ve already selected the person to lead them into the next NFL season.

After firing Vic Fangio following the end of the regular season, the Broncos reportedly cast a wide net in order to attract a lot of candidates for their head coaching position. Given that the Broncos play in the same division as the Kansas City Chiefs, Las Vegas Raiders, and Los Angeles Chargers, the need to compete ASAP is evident and they clearly want to make the right decision.

From NFL Now: The #Broncos are down to three finalists for their vacant HC job. pic.twitter.com/nEyvYHeZfw

Quinn is the most obvious finalist as he’s long been rumored as the favorite for the job. However, given how the Broncos are surrounded by strong quarterbacks and point-churning offenses in their division, the desire to have an offensive-focused coach might be driving them towards Hackett and O’Connell. But if the Broncos want to remain defense-focused as they were under Fangio, then Quinn would make more sense with the ability to bring in a solid offensive coordinator.

There has been at least one report that Hackett is the top choice and might already have the job, courtesy of Fox Sports’ Vik Chokshi.

Per a very good source, the Denver Broncos will be hiring Packers' OC Nathaniel Hackett as their next head coach. 👀

One of the most interesting wrinkles in hiring Hackett would be the assumption that Aaron Rodgers might be intrigued enough to follow him from Green Bay. Rodgers has opened the door to leaving the Packers following this season and we know that the Broncos were very interested in trading for him before the season. This could potentially be a star-aligning moment for all of them.

We’ll have to wait and see how things shake out but in the meantime, the news of the finalists certainly has a lot of people talking on social media.

Aaron Glenn is reportedly not among the Broncos' finalists. Buzz for him would grow next offseason if the Lions' defense takes a big leap, which it definitely could with a successful draft/free agency stretch. https://t.co/1oGYBV9kkr

Luke Getsy out. If Hackett gets the job, I'd imagine Getsy gets promoted to OC in Green Bay. Would he make a lateral move to be an OC who doesn't call plays in Denver if a certain QB joins him and Hackett? https://t.co/TjQPwDBYRZ

Rodgers to Broncos if this gets done? https://t.co/72SatlFFsT

Son of Paul. Does this mean Rodgers follows to Denver (which always seemed like a fit anyway)? https://t.co/7bcinodEoc