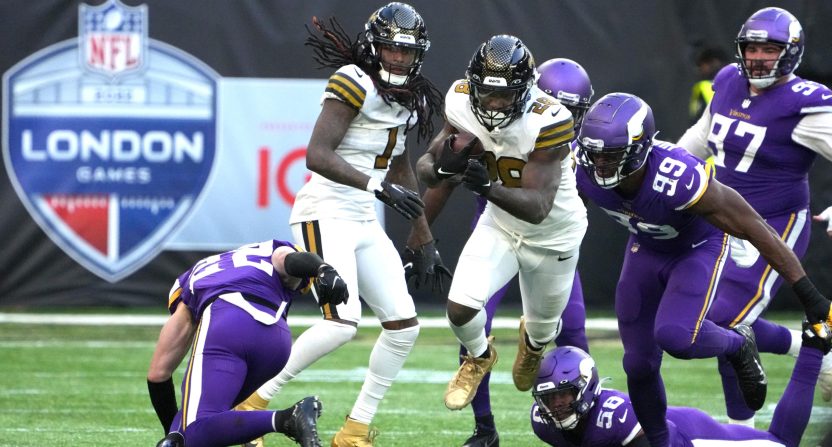 The fears that the Denver Broncos had surrounding the injury to running back Javonte Williams after Sunday’s loss to the Las Vegas Raiders were proven to be well founded. On Monday, it was revealed that Williams would miss the rest of the season with a torn ACL. In response, the Broncos have added a veteran running back.

Tom Pelissero of the NFL Network reported on Monday that the Broncos signed Latavius Murray. Murray, who reached the Pro Bowl in 2015 as a member of the then Oakland Raiders, had been on the practice squad of the New Orleans Saints.

The #Broncos are signing RB Latavius Murray off the #Saints’ practice squad, per source.

With Javonte Williams out for the season, Murray now joins Melvin Gordon and Mike Boone in the Denver backfield.

While Murray spent most of the 2022 season on New Orleans’ practice squad, he did suit up for the Saints in their Week 4 game against the Minnesota Vikings in London. In that game, he carried the ball 11 times, rushing for 57 yards and a touchdown.

Before that game, Murray’s most recent regular season experience came in the 2021 season, as a member of the Baltimore Ravens. He played in 14 games for the Ravens, starting six of them. With Baltimore, Murray logged 119 carries for 501 yards with six rushing touchdowns.

The Broncos have largely struggled to get their running game going this season. Williams had only 204 yards on the ground prior to his injury, while Melvin Gordon III has only 139.