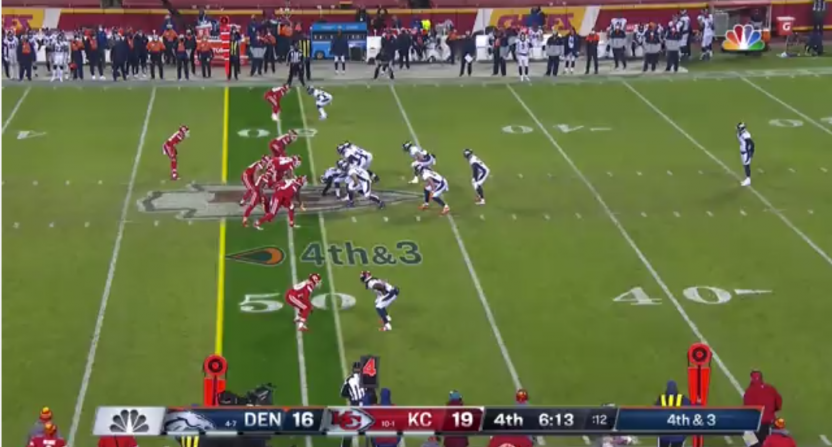 The Kansas City Chiefs held off the Denver Broncos 22-16 in a surprisingly competitive game on Sunday Night Football. The Broncos even had a 16-12 lead in the third quarter, and were at midfield while trailing 19-16 with just over six minutes remaining… only to punt.

On 3rd-and-3 at Denver’s 49-yard line, Broncos quarterback Drew Lock threw an incomplete pass. It was a questionable decision to call a pass play with this seeming to be obvious four-down territory, and with the Broncos’ offense running for 179 yards on 33 carries (5.4 AVG) in the game.

But on the next play, Denver head coach Vic Fangio showed that he was *not* treating it as four-down territory, and chose to punt. Yes, the Broncos punted on 4th-and-3 at midfield with just over six minutes remaining, while trailing by three points against *Patrick Mahomes*. NBC’s Cris Collinsworth understandably suggested a fake punt could be coming, because punting didn’t make sense.

The Broncos punted on 4th-and-3 at midfield with just over 6 minutes remaining, while trailing Patrick Mahomes by 3 points. pic.twitter.com/Q7SG3Xvack

Quite predictably, that backfired. The only surprise is that the Chiefs didn’t score a touchdown or completely run the clock out. But they did have a drive that lasted over five minutes and resulted in a field goal to make it a six-point game with 1:04 remaining.

That forced the Broncos to have to try to go 75 yards in a minute, with no timeouts remaining. And on 4th-and-5 at the Denver 30, Drew Lock threw an interception to seal the Chiefs’ victory.

The Chiefs then had a 5-minute drive to get a field goal, increasing their lead to six points with 1:04 remaining.

And on the ensuing drive, Drew Lock threw a pick to close this one out. pic.twitter.com/GNdLVYFB5t

The Surrender Index ranked this punt in the 99.6th percentile of cowardly punts this season, and the data isn’t even factoring in that the Broncos were giving the ball back to the most valuable player in football in this particular instance.

Here are more tweets about Fangio’s decision to punt:

I don't understand how nobody on the staff is there to tell Vic Fangio that his odds of converting a 4th-and-3 and eventually scoring a touchdown are way better than his odds of getting a stop after a punt and then going down the field for a touchdown.

Broncos punt on 4th and 2 from midfield cost them 8% win chance vs going for it. About the most costly late game decision with a real chance to win that I remember.

If you’ve ever watched a scary movie scene through your fingers because you know someone just made a terrible decision in the face of danger, that’s how I just watched the Broncos decide to punt it back to Mahomes rather than go for it on 4th down.

You can't just fire a coach based on one decision, but the midfield punt by Vic Fangio kind of sums up the kinds of decisions that are costing the Broncos over and over. Everyone except Fangio knew that was a clear mistake when it happened.

Coaches punting back to Mahomes in the 4th quarter: pic.twitter.com/qML5PtyG5I

You're punting on a 4th and 3 on your 50 yard line just to give the ball back to Mahomes with 6 minutes left, this is why you deserve to lose.

In the end, it’s another victory for the defending champion Chiefs, who are now 11-1. The Broncos fall to 4-8 with the loss.