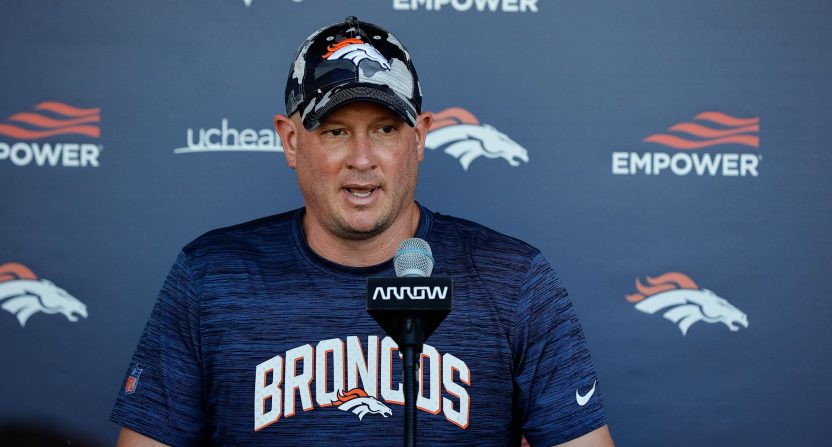 Nathaniel Hackett has changed his mind.

The Denver Broncos head coach, who has been harshly criticized for sending out kicker Brandon McManus for a 64-yard field goal attempt in the closing seconds of Monday night’s 17-16 loss to the Seattle Seahawks, admitted Tuesday he made a mistake. In case you missed the bizarre play, the Broncos faced fourth-and-5 at the Seahawks’ 46-yard line with 20 seconds left, plenty of time to run another play. Yet Hackett sent out McManus for the low-percentage kick, which sailed left.

After the heartbreaking loss, Hackett originally stood by his decision to kick the field goal. Tuesday at his media session, however, he had a change of heart.

#Broncos Hackett said they should have gone for it on fourth down #Denver7 pic.twitter.com/wRqwUB8dxW

It’s nice Hackett could own up to his mistake the day after, but the rookie head coach took a figurative beating on social media and talk radio after the game. Some pundits even suggested he’d mixed up his field position and thought the field goal attempt was in the 55-yard range. It didn’t help matters that the Broncos showed poor clock management on their final drive.

NFL Twitter was no less harsh to Hackett after his admission Tuesday.

Except then he made it sound like they should’ve gone for it because they missed FG, in hindsight. No, it’s because it’s the smart decision. Coaches love processes, that’s the right process #broncos https://t.co/02pi9HfoFe

Addressing his decision to steer into an iceberg, the captain of the Titanic told reporters. “Looking back on it, we definitely shouldn’t have done that.” https://t.co/ZbNHEoCuFG

Who twisted his arm first, Russ or Mark Rodgers? 😂

Respect the honesty, but if you’re second guessing yourself after just one game as head coach you’ll inspire 0 confidence, from players, fans, or media alike. https://t.co/7K7bxtbD6o

To be fair, some pundits gave Hackett credit for owning up to his mistake.

The decision was terrible but you gotta respect someone who owns up to their mistakes.

It’s certainly not something you see often anymore. https://t.co/fyQsQiPRqP

"Looking back at it…" If you didn't know to go for it in real time-the way every single person watching that game-I don't know what to tell you. I will say props to Hackett for owning a mistake, however. Most coaches would insist it was the "right call, just didn't work out." https://t.co/fOe4Sko9mr