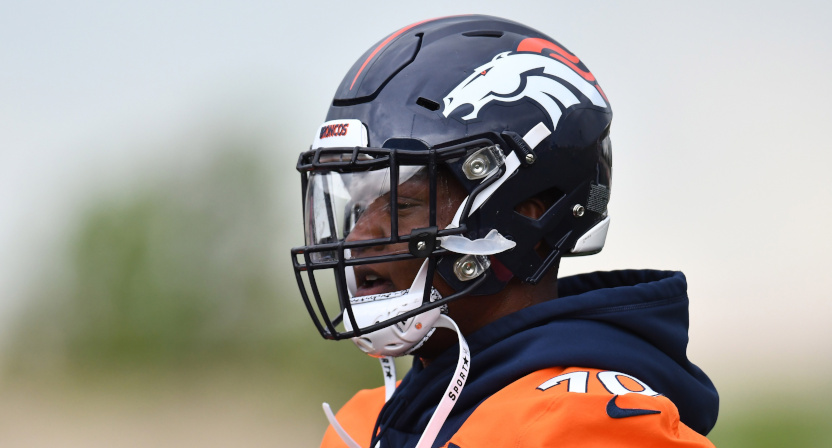 NFL player workouts outside of strict team supervision have been in the news recently with the NFLPA’s pushback on teams looking for in-person player participation in voluntary workouts. That discussion may take on a new dimension following Tuesday’s news of Denver Broncos’ right tackle Ja’Wuan James suffering a season-ending torn Achilles tendon in a workout outside the team’s facilities. As Michael David Smith writes at Pro Football Talk, that injury taking place outside the team facilities means that the Broncos aren’t obligated to pay James this season:

James experienced the injury while working out on his own, away from the team facility, according to Adam Schefter of ESPN. That he got hurt on his own — and not at the voluntary team workouts that many players are choosing not to attend this offseason — means the Broncos are not obligated to pay his $10 million salary for 2021.

Of course, that doesn’t necessarily mean James won’t be paid. The Broncos’ lack of contractual obligation doesn’t prevent them from paying him, and that’s certainly a possibility in a case where an injury seems to come from a legitimate football workout, even if it’s one not conducted by the team. It’s a different discussion than what we’ve seen in cases where players have hurt themselves in activities clearly not related to their sport. And even there, teams haven’t always gone after the pay, especially if the player’s highly valued by the team. But James has only played three games for the Broncos; he signed with them in 2019, but only played in three games that season thanks to a knee injury, and then opted out of the 2020 season over COVID-19 concerns. So there’s certainly a possibility that the team might try not to pay him here.

Of course, there’s also a possibility that if the team chooses not to pay James, the NFLPA could get involved. That could see the players’ association either pushing for payment or finding their own solution to get James his money. But this situation is worth keeping an eye on amidst the discussions about boycotting these voluntary workouts. If the Broncos choose not to pay James over an injury suffered away from their facilities, that may raise some further debates about the offseason workout programs and if players should take part.