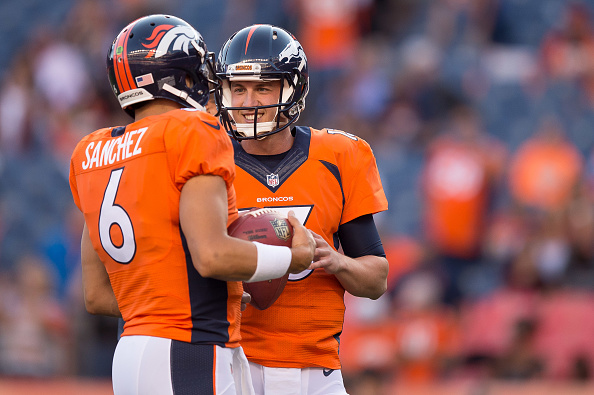 Denver Broncos beat writer Mike Klis of 9News.Com reports that Mark Sanchez has fallen behind Trevor Siemian on the Broncos’ quarterback depth chart, and is even in danger of losing a roster spot:

Mark Sanchez was right: He did squander his chance to win the starting quarterback job with his play Saturday against the San Francisco 49ers.

Sanchez must now try to protect his No. 2 spot. If he drops to No. 3, his $4.5 million salary may come into play when it comes to making the 53-man roster. The Broncos gave up what turned out to be a seventh-round draft pick to the Eagles in exchange for Sanchez on March 11 – two days after the team lost Brock Osweiler to Houston via free agency.

Sanchez was considered insurance in case the Broncos didn’t find a better option. Broncos’ general manager John Elway flirted with San Francisco quarterback Colin Kaepernick for six weeks but when a trade never materialized, he traded up five spots in the first round to select Lynch, a 6-foot-7 prospect from the University of Memphis.

Trevor Siemian, a seventh-round pick out of Northwestern in 2015, will make his second consecutive start on Saturday against the Rams, and now has the inside track for the Week 1 starting job. It seems that Siemian’s main competition for the job will now be the team’s 2016 first-round pick (26th overall), Paxton Lynch, and not Sanchez:

Siemian started this competition as somewhat of a backup afterthrought by everyone except maybe Kubiak, offensive coordinator Rick Dennison and quarterbacks coach Greg Knapp. And now Siemian has a decent chance to become the opening day starter for the defending Super Bowl champs.

I think that’s because Kubiak wants to see how both Siemian and the rookie Paxton Lynch plays against the Rams.

That’s right: This competition may no longer be Siemian vs. Sanchez but Siemian vs. Lynch.

So, it looks like the Broncos’ quarterback battle is between two players that have never thrown an NFL pass.

Klis says the Broncos have seen “too many negative plays” from Sanchez this preseason, and the team stresses ball protection from the quarterback position given their fantastic defense. If they don’t give the other team good field position through turnovers, they’re not going to allow many points. Siemian has thrown a pick-six, but so far the Broncos have been encouraged by his ability to limit turnovers, and they’ve seen “promising development” from the 6’7″ Lynch.

If Lynch keeps showing improvement, it would seem to be a pretty good bet that we’ll see him playing at some point this season after the team just used a first-round pick on him. He’s the future in Denver.

As for Sanchez, well, it seems the 29-year-old may not have any future in Denver, and his NFL career could be in jeopardy if he can’t land a roster spot over (essentially) two rookies.